And several issues are connected:
Futures Forum: Alma Bridge and Pennington Point: “There’s no point putting a beautiful new bridge there if the eastern end is cut off because the cliff has eroded.”

The BMP’s steering group has now forwarded its findings to the District Council’s consultants for consideration: 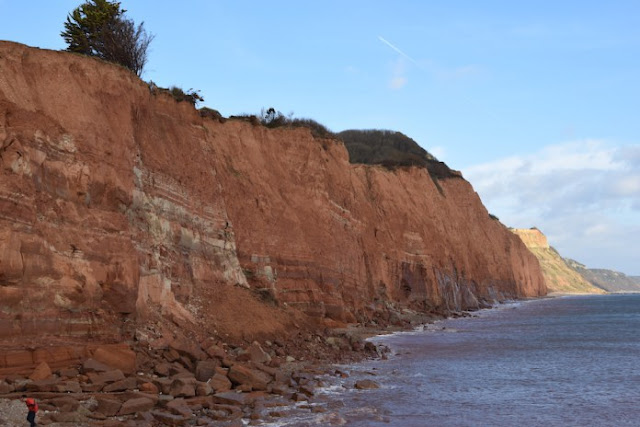 A CONSIDERATION period for long list of options for Sidmouth’s coastline has ended and East Devon District’s consultants will now review any comments made from the steering group.
The list is being developed to deliver the aims of the Sidmouth and East Beach Management Plan (BMP), which aims to maintain the standard of flood protection provided by the existing sea defences and reduce the rate of erosion at East Cliff, was revised in response to comments made by the steering group, following a meeting on January 15th.
Members of the group (which comprises representatives of the local community, local interest groups, as well as the Environment Agency, Natural England, South West Water and Devon County Council) had asked to see more detail about how the options for the short list would be decided and to understand why some options had been discounted for technical or environmental reasons.
Once the proposed short list has been agreed, CH2M, an engineering company working as EDDC’s consultants on the project, will be undertaking more detailed analysis of the options, which aim to protect Sidmouth from East Beach along through to Jacobs Ladder.
Consideration will be given to options such as altering the existing rock groynes along the sea front, or adding more offshore breakwaters. Following this more detailed appraisal, further consultation with the steering group and members of the public will be undertaken during June to agree a preferred option. This will include a public exhibition in Sidmouth, the purpose of which will be to gain as much feedback as possible to help inform the plan.
By the end of the summer, it is anticipated that the draft BMP will have been produced. This will be followed by further consultation and the finalisation of the plan itself in the Autumn.
The council will then prepare a detailed business case to access government funding for the scheme.
Councillor Andrew Moulding, who is the Chairman of the BMP steering group said:
“All the long list options have been appraised technically, economically and environmentally and the overall project aim is to develop one single integrated scheme for the seafront from Jacob’s Ladder to East Beach, and to inform a separate scheme for the River Sid that will be led by the Environment Agency at a later date.
“In the summer we will be consulting with the public at large on the proposed options and we look forward to hearing the thoughts of the community on the practical measures that we hope will ensure sustainable management of the beach and continued protection from flooding and coastal erosion.”