“Industry experts have questioned whether Flybe can succeed.”

“Will the daily commute … still be needed now that Covid has taught us all to video conference?”

A year ago, just as the pandemic hit, Exeter airport faced a real hit:

As Simon Calder reports in the Independent, things are back up again:

FLYBE TO RELAUNCH THIS SUMMER AFTER 2020 FAILURE

A year after Flybe collapsed, the failed regional airline is set to make a comeback this summer. But with 90 per cent of former routes now covered by other airlines, industry experts have questioned whether the carrier can succeed…

A spokesperson for the resurrected carrier said: “Today’s news represents a critical first step in our mission to accomplish the first-ever rescue of an insolvent British airline. While our company will initially be smaller than before, we intend to grow, create valuable jobs, and make significant contributions to essential regional connectivity in the UK and EU.”

Flybe’s main market was UK regional links. At the time of its collapse, it operated on 46 routes. But all but four are covered by other airlines.

The leading carrier is Loganair, with 17 former Flybe routes – including a newly announced link between Exeter and Norwich. Loganair’s chief executive Jonathan Hinkles said: “The fact that 42 of Flybe’s 46 lost domestic routes have now been restored shows the resilience and the importance of supporting the UK’s domestic airlines.”

The remaining unserved link, between Exeter and London City airport, is a distance of only 160 miles and competes against hourly trains taking as little as two hours 10 minutes.

Flybe to relaunch this summer after 2020 failure | The Independent 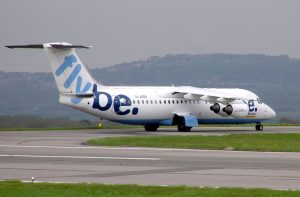 The question, then, is whether those UK regional links will return:

Questions over whether Flybe will return to Southampton Airport | Daily Echo

And if we look at what’s happened in France and regional links, there might not be too much of a future for closer air links anyway:

France to ban some domestic flights where train available

French MPs have voted to suspend domestic airline flights on routes that can be travelled by direct train in less than two and a half hours, as part of a series of climate and environmental measures. After a heated debate in the Assemblée Nationale at the weekend, the ban, a watered-down version of a key recommendation from President Emmanuel Macron’s citizens’ climate convention was adopted. It will mean the end of short internal flights from Orly airport, south of Paris, to Nantes and Bordeaux among others…

The climate commission set up by Macron had originally recommended the scrapping of all flights between French destinations where an alternative direct train journey of less than four hours existed. This was reduced to two and a half hours after strong objections from certain regions and from Air France-KLM, which, like other airlines, has been badly hit by local and international Covid-19 restrictions on travel.

To compare with the UK:

Exeter – Manchester: four and a half hours train journey

How Britain could upgrade its rail network to replace domestic flights

Britain should “think along the same lines” as German and French transport planners who are aiming to drive a shift from domestic flights to rail, according to Expedition Engineering director Alistair Lenczner.

Last week French lawmakers voted in favour of a bill to end short-haul internal flights where the same journey could be made by train in under two-and-a-half hours. The planned measures will face a further vote in the Senate before becoming law. Meanwhile, the German Aviation Association (BDL) and Deutsche Bahn (DB) signed an agreement last month committing to improve connectivity between aviation and rail and offer faster connections between cities, which could lead to the discontinuation of some domestic flight routes.

“I applaud France and Germany for doing it and I think Britain needs to be thinking along the same lines,” Lenczner told NCE. “It’s that sort of thinking you need to respond seriously to the climate situation but it needs concerted effort and coordinated thinking across sectors.”

However Lenczner said that for the approach to work, joined up thinking between different modes of transport is needed and emphasised that there is currently a “lack of cross sector planning in [UK] infrastructure”.

As such he said the first step should be for a commission or agency to be given the responsibility to “look at the whole transport infrastructure sector to make sure we’re not missing any tricks in terms of identifying opportunities to get people onto more environmentally friendly modes of transport”.

He added: “When infrastructure is planned – whether its rail, roads, aviation – it should be planned so you can use the most appropriate mode to get from one place to another. Often that will be intermodal – the first part might be road, then go on to rail but hopefully you avoid air. In Germany, Frankfurt is the most important international airport and that has a high speed rail station integrated within the airport. Ideally the equivalent would be for Heathrow to have something similar but there are no immediate plans for that to happen.”

… Meanwhile, where Cardiff, Bristol and Exeter currently compete in the South West, one airport would be needed to serve the south Wales/south west England region.

So, as well as the politics of local airports, there are the continuing controversies over HS2:

And the stories continue:

Could the Pandemic Spell the End of the U.K.’s High-Speed Rail? – The New York Times

To finish, Michael Fabricant MP writes in the House:

There are many arguments which have been presented against HS2: is cost, its damage to the environment, its inability to connect effectively to the rest of the transport network, and whether – in the light of Covid and changing work patterns – it is needed at all.

And HS2 and its supporters have changed their arguments over the course of the years to defend the project.

First, it was the glory of shaving 10 minutes or so off the journey time between London and Birmingham. Then it became the far more credible: it will relieve the congestion on existing railway lines such as the West Coast Main Line. Now, proponents of HS2 seem to have even dropped that argument and say instead that it will create jobs. For the amount of jobs it will create, the £100 billion-plus price tag seems a trifle high.

But I am not against HS2 in principle. It’s the practice that concerns me…

But my main objection to HS2 is its lack of connectivity. The original plan would have connected the rail line to HS1 and the Channel Tunnel, Heathrow Airport, and the main rail interchange at Birmingham New Street station. HS2 does none of this.

So the original concept of passengers joining the train at Manchester city centre arriving swiftly at the Gare du Nord in the heart of Paris – quicker than taking any flight – is not now the case. Far from dissuading travellers from using polluting air travel, changes of station at London (the train arrives at Euston where there is insufficient public transport followed by a trek to St Pancras with all your luggage to catch the Eurostar) will dissuade most from taking the train.

And it’s worse at Birmingham! Instead of HS2 arriving at Birmingham New Street, the main rail interchange station, it arrives at a separate station needing yet another trek to catch a connecting train. And any thoughts that Birmingham International Airport which will have an HS2 station will connect directly with Heathrow are also dashed. Yet another station change is required at Old Oak Common to reach Britain’s busiest airport.

Finally, the question has to be asked: will the daily commute to London from the midlands and the north still be needed now that Covid has taught us all to video conference?

I suspect HS2 is an unstoppable and expensive behemoth. But in years to come, people will exclaim – what a way to build a railway!

Yes, it’s all about the infrastructure:

The true costs of infrastructure – Vision Group for Sidmouth