The Sidmouth Repair Café  will be having its first session next month:

Meanwhile, as the latest on the Facebook pages has it, things are really hotting up in the States:

Don’t Throw It Away—Take It to the Repair Café

Here’s another great story, courtesy of the Transition Network:

10 Stories of Transition in the US: The Spread of Repair Cafés

In the midst of America’s Great Depression, merchants and manufacturers were looking for ways to quickly reboot the national economy. To get more people working and factories operating again, so the story goes, two main things needed to happen:

First, people had to replace what that they already owned. Through a process that real estate broker Bernard London called “planned obsolescence,” products began to be designed so they would soon fail. Second, the American people, and eventually the rest of the world, would need to shift from being the thrifty citizens that were so celebrated towards the end of World War I to the voracious consumers we are today.

While this extreme wastefulness was once seen as our civic duty, there is now a growing movement of people throughout the United States and all over the world who are finding better ways to strengthen their local economies while helping to heal the planet. One of the most exciting new strategies for doing this is a repair café. 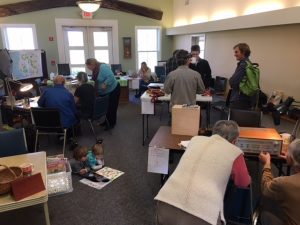 Even a few decades ago, shops that fixed shoes, televisions, and a number of other everyday products were still commonplace, but these institutions have been nearly wiped out in recent years. In their place, repair cafés are now providing people with opportunities to breathe new life into broken things while cultivating community at the same time.

10 Stories of Transition in the US: The Spread of Repair Cafes