“The lesson here is that in the climate of today, cities cannot just prepare for one extreme or the other — they must be prepared for anything.”

The 2020s are when quite a few dystopian films are set:

And there’s one in particular:

Although there’s some debate about the accuracy of the date, should you be interested:

What’s perhaps more prescient are some of the themes running through the cult movie:

Futures Forum: “The real-life Mad Max will be about water”

Over the past 20 years, Australia has weathered one of the most devastating droughts on the planet. You’ve seen the dust storms. You’ve seen the wildfires. And you’ve seen the trailer for Mad Max: Fury Road. The film takes place in a parched, near-future Australia, where the control and manipulation of water is the greatest power in the world…

The lesson here is that in the climate of today, cities cannot just prepare for one extreme or the other — they must be prepared for anything.

As for where to shoot the next Mad Max, Miller might need to look for yet another location. Namibia — considered to have some of the driest places on Earth — has started to see its own historic floods. Climate change may force the filmmaker to follow emerging weather patterns, chasing catastrophic droughts all over the globe for the best post-apocalyptic settings. Hopefully they won’t be filming the next Mad Max in the Central Valley of California. 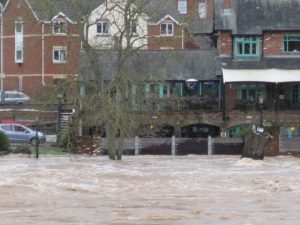 Meanwhile in the South West, we have the opposite problem:

Bosses at MoneySuperMarket found that the top 10 areas most hit by flooding in the past 12 months were as follows;

photo: Flood water at The Mill On The Exe © Brian Henley :: Geograph Britain and Ireland