On the 3rd December at the Steering Group meeting we were presented with some other options which might be useful within the beach management plan.

These are the images from that presentation. It was stressed that some of these were not worth pursuing due to the costs involved and that others needed a lot more research; these are not fully fledged options.

Since the meeting the VGS has been researching these options, links to our submissions to the Steering Group provided where available.

1)  An automatic, or powered, rising splash wall. It would be situated where the current dwarf wall is and not at the railings as this mockup from the manufacturers shows. 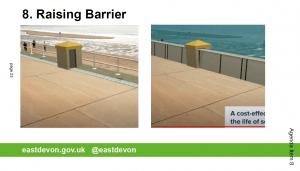 2)  An addition to the height of the Esplanade to create a recurved wall. Suggested by Cllr Stuart Hughes 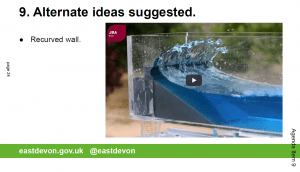 3)  SandSaver a low tech, passive way of building a beach over 3 months to a year. The idea is that the sand eventually covers the blocks. Suggested by the VGS 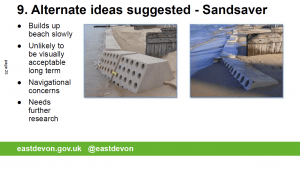 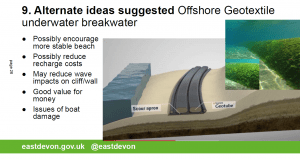 5)  Increased drainage on the Esplanade plus a pumping station. Suggested by Cllr Chris Lockyear 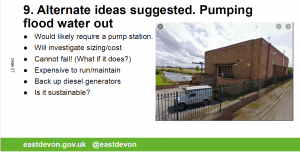 6)  An additional rock island, The Chamber of Commerce has identified an error in the estimated cost of extra islands given to EDDC, this makes an extra small island financially possible. 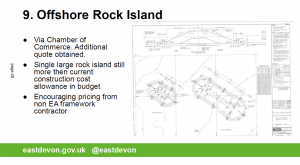