“The number of coastal communities questioning this industry grows steadily.”

Some breaking news from the Buenos Aires Times:

Salmon farming is the intensive farming and harvesting of salmonids, under controlled conditions, for commercial purposes. In this type of production, salmon are fattened in “floating cages” usually located in bays and fjords along the coasts — a technique first conceived in Norway during the late 1960s that grew exponentially in the last decades.

“Salmon farming would have represented a threat to the province’s economy, since in Ushuaia half of the families depend on tourism, an activity that could not coexist with the environmental impact of the industry,” said David López Katz, a member of the Sin Azul No Hay Verde (“Without Blue There Is No Green”) campaign of the Rewilding Argentina NGO. “This law is an example of caring for a sustainable economic and productive model, which respects cultural traditions and artisan practices that generate genuine jobs,” he added.

The global environmental organisation Greenpeace also celebrated the decision, stating: “Today, Ushuaia [the provincial capital of Tierra del Fuego] is protected from a harmful industry that has caused serious damage to the Chilean fjords and has seriously impacted local communities for decades.” …

The number of coastal communities questioning this industry grows steadily. In the United States, Canada, Scotland, Iceland, Tasmania and even in Norway, local communities are often opposed to the installation of cages, and although they have long sought to remove them from their fjords and channels, this is the first time that a country or region has banned the industry before it is settled.

A couple of years ago, the BBC reported from Scotland:

Scottish salmon is marketed as healthy, sustainable and environmentally-friendly but is that image accurate?

It was once considered a luxury but now a staggering one million salmon meals are eaten in the UK every day. The fish is one of the UK’s biggest food exports and said to be worth more than £1bn a year to the economy.

In supermarkets, the packaging shows pristine Scottish waters and projects an image of a clean and natural product. But look at the small print and you will see that all Scottish salmon is “farmed”.

Is there a problem with salmon farming? – BBC News

And earlier this year, the Marine Scotland Directorate produced a report for the Scottish government:

It is pretty shocking:

To the extent that many now consider the practice environmentally very unfriendly:

Supermarkets are responding to these concerns:

But a growing campaign is not convinced:

Open letter to Marks and Spencer on Salmon | Ecohustler Magazine 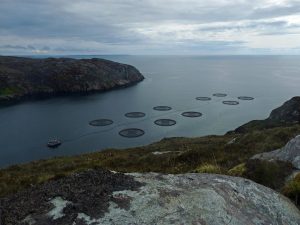 Although the industry is fighting back:

taken 4 years ago, near to Grabhair, Na h-Eileanan an Iar, Great Britain

At the time of uploading, the farm is operated by The Scottish Salmon Company and produces Atlantic salmon. Also on the farm are wrasse and lumpsucker which are “cleaner fish” used to control sea lice.