Sidmouth: “the current dwarf wall did a very good job of containing most seawater overtopping to the Esplanade.”

The Advisory Group to the BMP (formerly known as the Steering Group) met up at the end of last year:

It will be meeting up again later this month – and one of the issues to discuss will be the raising of the splash wall on the Esplanade:

The storms over the weekend were pretty violent – but, as an observer notes of the seafront in Sidmouth, “there is only a small amount of shingle thrown up in front of the York where the beach is very low and nothing further along.”

A report put together for the VGS website underscores this.

Click on the link for the full set of photos:

The BMP currently (1st Feb 2021) includes a modelling prediction that Sidmouth will suffer flooding from the sea every year. This prediction was made in 2017 and has not been proven correct so far. 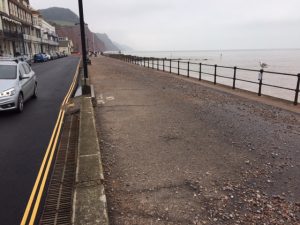 After the storm damage in places along the coast on the 31st Jan 2021 it has been thought prudent to start collecting information about how Sidmouth has faired in these events. The images below are part of this process.

The images above show where the pebbles have been left and this indicates where large amounts of water reached. They show that the current dwarf wall did a very good job of containing most seawater overtopping to the Esplanade. Very little made it over on to the road. The place where the shingle was thrown on to the Esplanade was where the beach is very low.

The report goes on to compare how the storm affected Seaton – which has a considerable sea wall:

Seaton suffered major damage. Reports are that the waves at Seaton were coming straight on to the sea defences…

This has been corroborated by photos of the storm aftermath posted on the Seaton Notice Board: