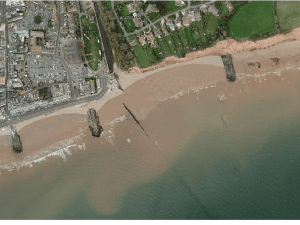 It was suggested by a member of the BMP’s steering group that the VGS put together a ‘framework’ to look at the project’s so-called ‘Preferred Option’ (pictured) – which entails a large groyne (aka a Supergroyne, on East Beach beyond Pennington Point), together with recharging both Main and East Beaches, plus raising the Sea Wall.

This suggestion was taken up primarily because so much is still unclear about what justification and what evidence there is for the project – all against the background of years of confusion if not dismay from both members of the BMP steering group and the wider public about the project.

The suggestion, then, was that, by looking specifically at the project’s Aims & Objectives, it could be determined whether or not the Preferred Option was ‘justifiable’ and ‘sustainable’, and whether it was ‘integrated’ with all the other aspects of the project.

And by analysing these aspects, specific problems and alternatives could be looked at, together with supporting evidence and sources – all in the light of the Aims & Objectives.

They are as follows:

3) Carry out (1) and (2) in an integrated, justifiable and sustainable way.

They can be found on the pages dedicated to the BMP:

The final VGS document analysing this has been forwarded to the BMP’s Advisory Group (formerly known as the Steering Group):

And can also be found here:

A framework for the BMP – Vision Group for Sidmouth

A version with an introduction has been put together for the wider public:

The document is divided into sections – which:

The hope is that, once readers have completed the document and review of supporting links, they feel a little better informed about:

Finally, the BMP Advisory Group will be meeting up on Thursday 25th February as of 9.30am – and will be open to the public.

Members of the public will be able to view the meeting live on the EDDC’s YouTube channel: