“There will be objections to this idea from some environmental groups, but the crucial point they must consider is that this would be a truly sustainable system.”

BUT understanding these fish or marine conservation means that “any tagging that needs to be done should only be carried out as part of limited and strictly controlled project.”

How can we, post-Brexit, manage our fish stocks?

Last week, Nigel Farage suggested there is a ‘golden opportunity’ for the West Country fishing industry:

Writing in the Telegraph, he has a specific proposal to make, which “would be a truly sustainable system”: 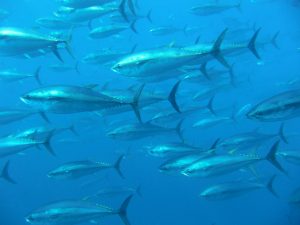 Amid the gloom, there is some good news, however. Bluefin tuna are back in British waters in huge numbers and, if managed correctly, this could bring a significant boost to fishing businesses. Their presence could also heighten the tourist trade in many parts of the country…

As the Americans have discovered, the potential value of a managed recreational fishery is far greater than that of a commercial one. A catch-and-release system in British waters could be worth a huge amount of money to many seaside communities. Efforts to introduce this structure cannot begin soon enough… I am certain that a well-regulated catch-and-release fishery would see anglers from all over the world flocking to the West Country…

I have no doubt there will be objections to this idea from some environmental groups, but the crucial point they must consider is that this would be a truly sustainable system – the very opposite of our European neighbours who continue to kill fish in vast numbers…

Ministers have a golden opportunity to save our beleaguered coastal communities. They must seize it

Cornwall Green Party has condemned the proposal by Derek Thomas, MP for St Ives, to promote “sport fishing” of bluefin tuna as a way of boosting tourist spending in Cornwall.

“Mr Thomas is lobbying the government to approve a new ‘catch and release’ fishery to enable more bluefin tuna to be hunted by sports fishermen. He claims this would be helpful in enabling these fish to be tagged to assist in conservation work. But this shows that Mr Thomas has no understanding either of these fish or of marine conservation.

“Bluefin tuna are an endangered species, and any tagging that needs to be done should only be carried out as part of limited and strictly controlled projects, such as that being undertaken by the University of Exeter. Calling for a big expansion in so-called ‘sport fishing’ is simply irresponsible.”

A DEFRA spokesperson recently pointed out that “despite some early signs of improvements to Bluefin tuna stocks, there are still high levels of uncertainty around the extent of the recovery of this iconic species”.

And here is the Exeter study:

Dr Matthew Witt, lead scientist on the project for the University of Exeter, said: “This a ground-breaking project for the UK and another important step towards the use of evidence-based approaches for marine conservation. These are huge, exciting top predators, yet with an uncertain future. We are incredibly excited to be able to work on these fish, which I suspect to many conjure thoughts of tropical warm waters, yet they are here in our coastal sea. The next few years will be challenging, exciting, yet hugely revealing regards their movements and biology.”

With a report from a year ago:

As featured on these pages last summer: