It is becoming common practice to cover trees to keep birds out: 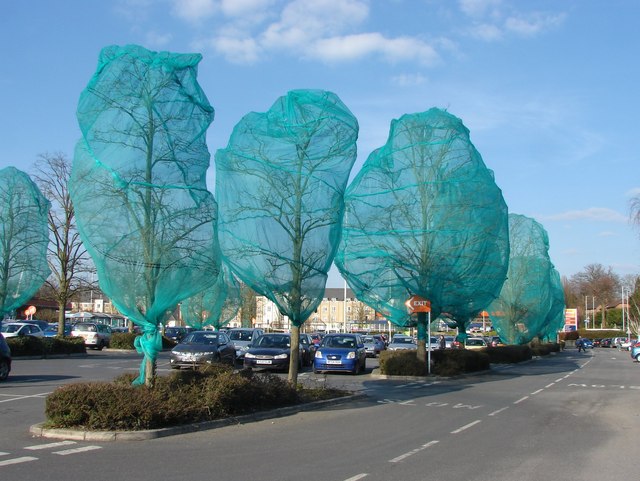 In preparation for development work at Sainsbury’s Brookwood branch the trees that are going to be removed have been wrapped in netting to prevent birds from nesting resulting in this wonderful idiosyncratic view.

© Copyright Alan Hunt and licensed for reuse under this Creative Commons Licence.

And earlier this month, it was asked:

Why Are People Putting Nets Over Trees?

Despite the arrival of spring, many parts of England are not as alive with the sound of birdsong as they might normally be at this time of year. That’s because property developers all over the country have taken to covering trees, bushes and hedgerows with unsightly netting aimed at discouraging bird populations from making their homes in sites earmarked for construction.

The measure is not illegal as it exploits a loophole in the law. At present, it is a criminal offence to destroy or remove the active nest of a bird, but it is not illegal to implement steps aimed at stopping birds from creating the nests in the first place. The practice has provoked widespread anger and criticism from all across the environmental community.

One outspoken critic of the nets has been TV presenter Chris Packham, who described it as the “antithesis of everything conservation stands for”. Other high-profile campaigners include broadcaster Jake Humphreys and novelist Phillip Pullman, while an online petition to outlaw the practice was started earlier this year. At present, it has over 350,000 signatures.

Why Are People Putting Nets Over Trees?

East Devon’s MP Hugo Swire has been speaking out against the practice:

In Parliament, I have called on the Government to ensure housing developers cannot use nets to prevent birds from nesting in trees and hedgerows.

This follows a petition of over 300,000 signatures, with 805 signatories in East Devon.

Thank you for those who have contacted me on this – I am working with the RSPB and have previously asked officials at the Ministry of Housing, Communities and Local Government to look into how widespread the practice is.

In a debate in Parliament, I argued that, as a first step, Ministers must update guidance to developers that nets should not be used during the breeding season. You can watch my speech here.