The notion of a new national park has been gaining ground:

And is moving forward:

‘Jurassic Park’ plans for parts of Devon and Dorset

An independent review undertaken last year by Julian Glover into National Parks and Areas of Outstanding Natural Beauty noted there was potential for a new National Park to be formed from the combination of the Dorset AONB and the East Devon AONB.

And a council committee has just looked at it: 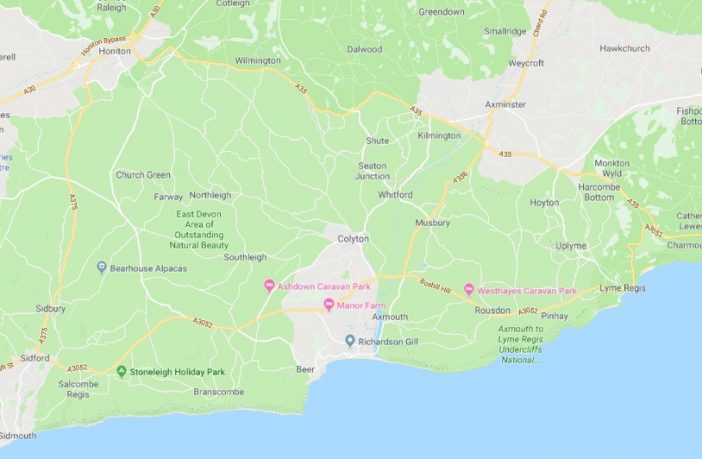 Calls have been made for a new Dorset and East Devon National Park to be created. Picture courtesy of Google Maps.

The Glover Review of protected landscapes in England is set to be discussed by East Devon District Council’s (EDDC) Strategic Planning Committee.

A report by Ed Freeman, EDDC’s service lead, to the meeting reminds the committee that around two thirds of East Devon falls in designated AONBs.

Welcome to ‘Jurassic Park’ in East Devon and Dorset?

However, councillors have expressed disquiet:

Here are the full minutes from that meeting:

The motion read as follows:

“That the council writes to thank Julian Glover and his team for the Glover Review into National Parks and AONBs and advises him of its next steps, the letter to be copied to the Secretary of State for the Environment, Theresa Villiers MP, and to the Leader of Devon County Council, Cllr John Hart.

That the council welcomes the historic recommendation on page 121 of the Glover Review which states:

“We received submissions on the case for several other AONBs to become National Parks too. The two that stand out as leading candidates are the Cotswolds AONB and the combined Dorset and East Devon AONBs”

That the council supports the formation of a cross party working group of up to 12 members to make contact as soon as possible with representatives of the proposed Dorset section of an East Devon/Dorset National Park to arrange a meeting at Blackdown House no later than January 30th 2020 in order to engage with and understand the issues and opportunities which would arise from a new National Park.

That this working group makes an initial report to the Overview Committee in March 2020.”

In response Members voted to debate the item.

The Chief Executive outlined the reasons why the report had come before the Strategic Planning Committee and advised members about setting up a working party to look at the implications of going down the National Park route.