A portrait of medicinal plants growing in our midst.

The Friends of the Byes group does all sorts of things to bring the wildlife of park and meadows alive – including regular guided walks – the next one, hopefully, being Saturday 5th December:

Since its inception, one of the aims of the FOTB has been to look at the biodiversity of the Byes:

Friends of the Byes: ten years on – Vision Group for Sidmouth

Here he is writing the regular biodiversity column for the Herald, republished with permission – with his piece given in full below: 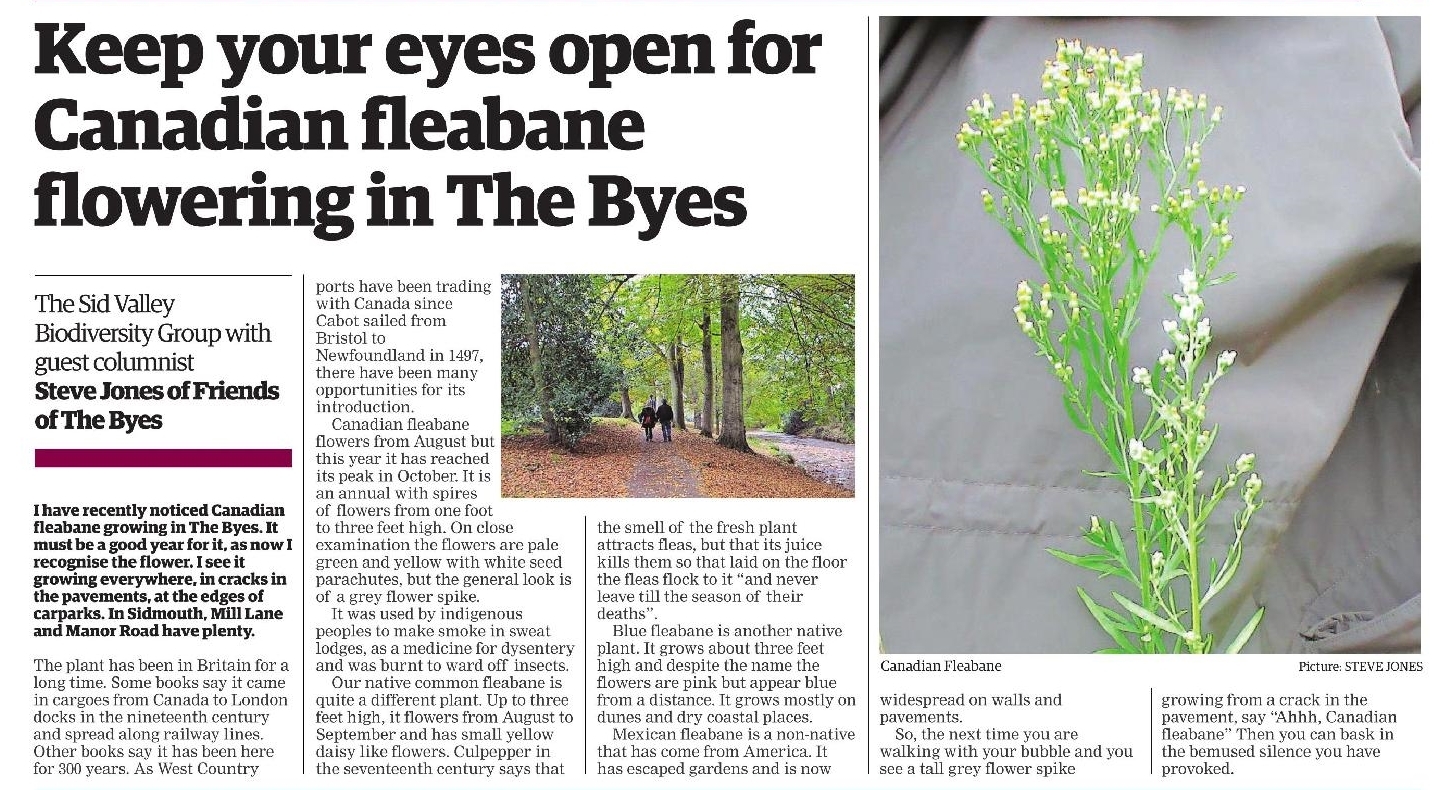 I have recently noticed Canadian fleabane growing in the Byes. It must be a good year for it, as now I recognise the flower: I see it growing everywhere, in cracks in the pavements, at the edges of carparks. In Sidmouth, Mill Lane and Manor Road have plenty.

The plant has been in Britain for a long time. Some books say it came in cargoes from Canada to London docks in the nineteenth century and spread along railway lines. Other books say it has been here for 300 years. As West Country ports have been trading with Canada since Cabot sailed from Bristol to Newfoundland in 1497, there have been many opportunities for its introduction.

Canadian fleabane flowers from August but this year it has reached its peak in October. It is an annual with spires of flowers from one foot to three feet high. On close examination, the flowers are pale green and yellow with white seed parachutes but the general look is of a grey flower spike.

It was used by indigenous peoples to make smoke in sweat lodges, as a medicine for dysentery and was burnt to ward off insects.

Our native common fleabane (Pulicaria dysenterica) is quite a different plant. Up to three feet high, it flowers from August to September and has small yellow daisy-like flowers. It is a perennial and likes damp ground. It was dried and burnt to drive fleas away. However, Culpepper in the seventeenth century also says that the smell of the fresh plant attracts fleas but that its juice kills them so that laid on the floor the fleas flock to it “and never leave till the season of their deaths”. The plant was also used as a medicine for dysentery.

Blue fleabane is another native plant. It grows about three feet high and despite the name, the flowers are pink but appear blue from a distance. It grows mostly on dunes and dry coastal places.

Mexican fleabane is a non-native that has come from America. I first saw it in the Basque country of the Pyrenees, then it turned up in damp places in North Devon but now it is everywhere. It is valued here as a garden flower. The RHS has given it the Award of Garden Merit and has featured in show gardens at the Chelsea Flower Show. It is a low growing plant with white daisy flowers that go pink with age, and has escaped gardens and now is widespread on walls and pavements. It was used by the Cherokee as medicine for kidney complaints and gout

So, the next time you are walking with your bubble and you see a tall grey flower spike growing from a crack in the pavement, say “Ahhh, Canadian fleabane”. Then you can bask in the bemused silence you have provoked.