… a “once in a generation” chance to change the country for the better.

At its daily press briefing today, the government has announced a further push for sustainable transport:

U.K. transport secretary Grant Shapps has announced an ambitious £2 billion plan to boost cycling and walking both during and after the lockdown. He described at as a “once in a generation” chance to change the country for the better. Business would be boosted by more people cycling and walking, he said.

The £2 billion plan starts with £250 million to enable local authorities to pay for “pop-up” cycling and walking infrastructure to cater for physical distancing during lockdown. Shapps made the announcements at the government’s daily COVID-19 briefing on May 9.

The £2 billion is not new funding, it is part of the £5 billion in new funding announced for cycling and buses in February. However, the language used by Shapps in the briefing, as well as a raft of unexpected announcements, are very much novel. “Fast-track statutory guidance to cater for significantly increased cycling and walking,” would be implemented “immediately,” he said.

A press statement added that the guidance will “tell councils to reallocate roadspace for significantly-increased numbers of cyclists and pedestrians.” 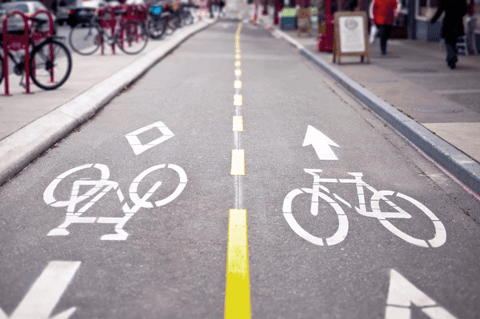 NGOs have been putting pressure on the government to act:

With a letter sent today:

Nine organisations including Greenpeace and the Transport Action Network have written an open letter to the UK secretaries of state for transport and the environment, as well as the chancellor, leaders of local and regional authorities and city mayors. “It would be completely absurd if, after the unprecedented efforts and sacrifices made to save thousands of lives from Covid-19, we allowed thousands more to be cut short by the devastating impacts of toxic pollution,” the letter reads.

The group’s demands include wider pavements, protected cycle tracks and the installation of bus gates, bollards and planters to limit traffic in residential and shopping streets. The letter also calls for networks of low-traffic neighbourhoods and for walking and cycling to be prioritised along main roads.

Last month, advice was being given to local authorities:

Roads Can Be For People Not Cars, States U.K. Government Lockdown Guidance

The U.K.’s Department for Transport (DfT) has loosened its rules to enable roads to be closed to motor traffic and given over to pedestrians and cyclists during the duration of the coronavirus lockdown. Extra space for people enables key workers and others to maintain two meters of physical distance when walking or cycling.

Typically, any change of use for roads in England has to be enabled by local authorities issuing “Traffic Regulation Orders”—these usually take time to implement, have to be publicized through paid-for advertisements in local newspapers and by on-site notices. They can be stymied by objections. The looser rules—announced on April 16—will be “withdrawn once conditions allow,” states the DfT…

The DfT’s rule loosening gives local authorities the power to quickly and easily make roads car-free, widen footways, or install temporary cycle lanes. English towns and cities will now be able to join with Berlin, Bogota, Vancouver, and many other urban areas around the world that have been giving over road space to cyclists and pedestrians during the pandemic, providing people with the sort of generous space generally allotted to motorists.

Roads Can Be For People Not Cars, States U.K. Government Lockdown Guidance | forbes.com

This week, London began to act;

The Mayor of London, Sadiq Khan, and TfL have today unveiled their ‘London Streetspace’ programme which will rapidly transform London’s streets to accommodate a possible ten-fold increase in cycling and five-fold increase in walking when lockdown restrictions are eased…

And other towns and cities are doing very similar things:

Is this the future of tourism? How York plans to make visitors walk one-way down its famous street The Shambles to ensure social distancing after lockdown | dailymail.co.uk

Lithuanian capital to be turned into vast open-air cafe | theguardian.com

London, New York, Paris and Milan give streets to cyclists and pedestrians | dezeen.com