“… could slash greenhouse gas emissions from crop production by nearly a third and increase how much carbon soils can store.”

The final episode of the latest series on ‘ways to save the planet’ took us to a farm in Northamptonshire:

Can British farmers transform themselves into carbon-cutting heroes? Arable farmer, Duncan Farrington has worked hard to reduce the carbon emissions from his farm. He’s replanted hedges and trees and cut down on diesel-powered machinery. He’s even persuaded some of his staff to cycle to work. But Duncan’s farm isn’t just zero carbon, it’s actually sucking in and locking up vast quantities of carbon dioxide from the atmosphere.

Duncan explains to Tom how he’s transformed the management of his soil and proven to doubters that commercial British arable farms can play their part in cutting the planet’s carbon emissions.

BBC Radio 4 – 39 Ways to Save the Planet, Zero Carbon Farm 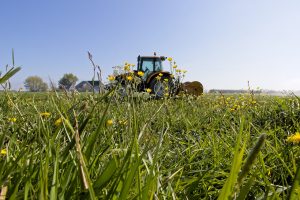 And here’s a lot of media attention:

He is taking more and more interest in ‘low-till’ farming:

Duncan continues in his quest to learn how best to nurture and improve his soils. He stopped using the plough in 1998 when he took up min till and zero till techniques, he grows a sustainable crop rotation, fertility building green manure and companion crops.

And this does indeed seem to be a way forward.

Here’s some research outlined in The Conversation:

Perhaps because there are no chimney stacks belching smoke, the contribution of the world’s farms to climate change seems somehow remote. But agriculture accounts for a staggering 26% of all greenhouse gas emissions. Tractors running on diesel release carbon dioxide (CO₂) from their exhausts. Fertilisers spread on fields produce nitrous oxide. And cattle generate methane from microbes in their guts.

Even tilling the soil – breaking it up with ploughs and other machinery – exposes carbon buried in the soil to oxygen in the air, allowing microbes to convert it to CO₂. Farmers usually do this before sowing crops, but what if they could avoid this step?

In newly published research from farms across the UK, we discovered that an alternative approach called no-till farming, which does not disturb soils and instead involves placing seeds in drilled holes in the earth, could slash greenhouse gas emissions from crop production by nearly a third and increase how much carbon soils can store…