The latest from Michael Moore is causing a lot of controversy:

“This film is the wake-up call to the reality we are afraid to face: that in the midst of a human-caused extinction event, the environmental movement’s answer is to push for techno-fixes and band-aids. It’s too little, too late.”

“Unfortunately, the movie is littered with misleading, skewed, and outdated scenes…”

Released on its eve, here is a very provocative documentary, available to watch in its entirety:

Michael Moore presents Planet of the Humans, a documentary that dares to say what no one else will this Earth Day — that we are losing the battle to stop climate change on planet earth because we are following leaders who have taken us down the wrong road — selling out the green movement to wealthy interests and corporate America. This film is the wake-up call to the reality we are afraid to face: that in the midst of a human-caused extinction event, the environmental movement’s answer is to push for techno-fixes and band-aids. It’s too little, too late.

Removed from the debate is the only thing that MIGHT save us: getting a grip on our out-of-control human presence and consumption. Why is this not THE issue? Because that would be bad for profits, bad for business. Have we environmentalists fallen for illusions, “green” illusions, that are anything but green, because we’re scared that this is the end—and we’ve pinned all our hopes on biomass, wind turbines, and electric cars? No amount of batteries are going to save us, warns director Jeff Gibbs (lifelong environmentalist and co-producer of “Fahrenheit 9/11” and “Bowling for Columbine”). This urgent, must-see movie, a full-frontal assault on our sacred cows, is guaranteed to generate anger, debate, and, hopefully, a willingness to see our survival in a new way—before it’s too late. 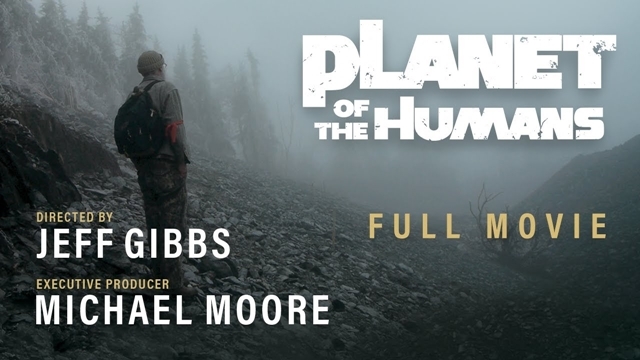 Not everyone is impressed.

This is from Yale Climate Connections:

Environmentalists and renewable energy advocates have long been allies in the fight to keep unchecked industrial growth from irreversibly ruining Earth’s climate and threatening the future of human civilization. In their new YouTube documentary “Planet of the Humans,” director Jeff Gibbs and producer Michael Moore argue for splitting the two sides. Their misleading, outdated, and scientifically sophomoric dismissal of renewable energy is perhaps the most dangerous form of climate denial, eroding support for renewable energy as a critical climate solution.

“Planet of the Humans” by the end of April had more than 4.7 million views and fairly high scores at the movie critic review aggregator Rotten Tomatoes. The documentary has received glowing reviews from numerous climate “deniers” whose names are familiar to those in the climate community, including Steve Milloy, Marc Morano, and James Delingpole. Some environmentalists who have seen the movie are beginning to oppose wind and solar projects that are absolutely necessary to slow climate change.

The film by these two “progressive” filmmakers may succeed where Fox News and right-wing talk radio have failed: to undermine humanity’s last best hope for positive change. As energy journalist Ketan Joshi wrote, the film is “selling far-right, climate-denier myths from nearly a decade ago to left-wing environmentalists in the 2020s.”

The film follows Gibbs as he visits various green technology sites in the United States and ostensibly learns that each one is just as bad as the fossil fuel infrastructure that it would replace. Unfortunately, the movie is littered with misleading, skewed, and outdated scenes…