“Most developers tend to be slightly smarter than sending in the bulldozers; they say to the council, ‘This is a derelict site that needs to be rebuilt as flats.’”

Who decides that a property is ‘old and unwanted’, rather than a valued piece of local heritage?

Futures Forum: Fortfield Hotel … to … Knowle … or: how to market an old unwanted property

One way to get rid of an old and unwanted property is to just leave it to rot:

The Fortfield Hotel was an imposing Arts & Crafts building on the seafront – along with others of its age:

It was left to become dilapidated after the owners were refused planning permission in 2011 – when one night, fire broke out… and so it had to be pulled down and ‘redeveloped’:

Futures Forum: Fortfield Hotel … to … Sanditon apartments: … the ‘issues’ are opened up again… (note the Comments)

Futures Forum: Fortfield Hotel … to … Sanditon apartments >>> How much exactly will Sidmouth benefit from S106 cash from developers?

The Knowle hotel has even more of an impressive history and position:

It was to become HQ of the District Council – who allowed it to become so dilapidated that it became  ‘unfit for use’:

Futures Forum: Knowle relocation project: “How efficiently is this building being used?”

Perhaps after a landmark case in London, owners and developers will not be allowed to be quite so cavalier with ‘old and unwanted’ property – as reported in today’s Guardian:

Rising from the rubble: London pub rebuilt brick by brick after illegal bulldozing 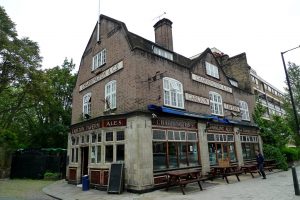 The Carlton Tavern’s last orders were in April 2015. After being denied planning permission to convert it into 10 flats, and two days before English Heritage was due to recommend the pub be granted Grade-II listed status, the owners ordered its demolition.

Polly Robertson [a leading member of the Rebuild the Carlton Tavern campaign] and 5,300 other locals, including several local councillors, mobilised to persuade Westminster council to act. It ordered the owners, CTLX, to rebuild the Carlton brick by brick. A planning inquiry the following year confirmed the decision, ruling that the pub should be rebuilt “in facsimile”, from the red bricks to the distinctive tiled pub name…

James Watson, the pub protection adviser for the Campaign for Pubs, advised the Carlton campaign. “I never imagined that I would see a planning inspector order a developer to put back what he’d just knocked down, to look exactly as it was. I thought the developer would get a slap on the wrist, a £6,000 fine. But I was flabbergasted – and it has set an incredibly useful precedent. Other planning inspectors will remember it, and so will developers.”…

“Most developers tend to be slightly smarter than sending in the bulldozers,” he said. “The age-old trick is to take some tiles off the roof and let the rain in. The beams rot, it collapses and they say to the council, ‘This is a derelict site that needs to be rebuilt as flats.’”

Councils in Cambridge and London are questioning this method more and more, Watson said. “They’re challenging these Trojan horse attacks on pubs, where they say they’re going to put a bike shed in the basement and a gym upstairs and, suddenly, your pub space is just a lock-up. We need other councils around the country to do the same,” he said. “Planning officers need to be wise to these tricks.”

Rising from the rubble: London pub rebuilt brick by brick after illegal bulldozing | Pubs | The Guardian

The story has attracted a lot of attention:

Including the architecture industry:

With the Wikipedia entry being updated earlier today: