‘Climate change is happening. It’s just not the end of the world. It’s not even our most serious environmental problem.’

Back in July, a book came out challenging many ‘green’ assumptions:

The environmentalist’s apology: how Michael Shellenberger unsettled some of his prominent supporters | Environment | The Guardian

Here’s the Mail’s take on it at the time:

Distilling the contents of his new book, Apocalypse Never: Why Environmental Alarmism Hurts Us All, he recently wrote an online opinion article for the business magazine Forbes entitled ‘On Behalf of Environmentalists, I Apologise For The Climate Scare’. He continued: ‘Climate change is happening. It’s just not the end of the world. It’s not even our most serious environmental problem.’…

And here’s the DeSmog take on the author:

The October Los Angeles Review of Books carries a long and critical review of his book: 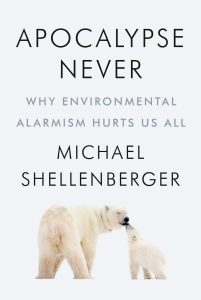 MICHAEL SHELLENBERGER WANTS US to believe environmentalists are impeding our ability to solve environmental problems. This has long been the position of Bay Area ecomodernists, who argue that technology and growth, not limits, will save the planet. Now, in his best-selling new book “Apocalypse Never: Why Environmental Alarmism Hurts Us All”, Shellenberger goes further, claiming that climate change and species extinction are not terribly threatening anyway…

And so it is for these reasons that I’ll take an ecological worldview and a politics of self-limitation over Shellenberger’s vision. The other day my friend Aaron Vansintjan, drawing on the late Murray Bookchin, tweeted, “The view that because we, as human beings, are so special we can, and should, have the right to dominate nature is rooted in the same logic that justifies colonialism, patriarchy, and racism.” [35] Men in power have rationalized all those forms of domination by claiming that they facilitate economic development, which is purportedly great for people and nature. Sound familiar?

Whilst the November issue of Reason, the USA’s “leading libertarian magazine” carries a favourable review:

The book is a sustained argument that poverty is humanity’s most important environmental problem and that rising prosperity and increasing technological prowess will ameliorate or reverse most deleterious environmental trends.