Seaminster: regeneration of a seaside town through “creativity, unconventionality and misrule”

Building a digital and creative economy: Zoomtown or Doomtown?

A seaside town which has been doing ‘the right things’ has attracted a lot of attention:

Seaminster: regeneration of a seaside town through “creativity, unconventionality and misrule” – Sidmouth Solarpunk

And another place is marketing itself with a new and dynamic approach:

Scarborough is reinventing itself as “Zoomtown-on-sea”.

Although there are warnings:

Will Hutton shines an overdue light on the desperate trouble our coastal towns are in. However, I’m not sure championing the exodus from metropolitan areas to the coast is the panacea for this.

The acceleration of this trend, partly fuelled by Covid, has become pronounced in the last six months. One damaging consequence is the rapid rise in rents and prices. The larger salaries and capital of incomers mean the housing crisis has worsened. The gap between average incomes and housing costs is growing rapidly and young people can no longer afford to live in the places they grew up in.

The crisis facing coastal towns requires the building of more affordable housing and a significant expansion in social housing. Addressing the appallingly low level of local wages must also be a priority. Unless this kind of overarching approach is taken, Zoomtown for some will mean Doomtown for others.

Letters: our seaside towns are worth saving | Society | The Guardian

But it might work the other way, keeping young people from fleeing the low-wage seaside economy:

Liz Colling, Scarborough’s councillor in charge of inclusive growth, wants the town’s next reinvention to be about revitalising the local economy, including encouraging more digital jobs. It’s a “very realistic ambition” which is already beginning to happen, she says. “I have a nephew who has just started a job remotely. He would never have applied before because it’s based in London,” says Cllr Colling, adding that her son is also working remotely. “Historically our younger people have left town to pursue education and jobs, but this is a sign that you can still stay here and have a really good career,” she says.

Zoomtown-on-Sea? The lure of a new life on the coast – BBC News 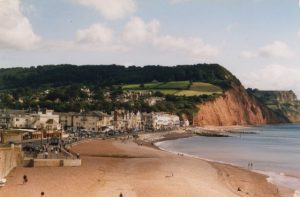 The seaside is attractive if not alluring – but traditionally, despite the bracing air, there are health issues, largely due to poor wages:

Their residents’ worsening health and well-being – and lack of health provision – is gradually becoming visible to government and the media, thanks in large part to England’s chief medical officer Chris Whitty. His Chief Medical Officer Report for 2021: Health in Coastal Communities sets out a stark picture of poor health and low life expectancy for those who live in many English coastal towns.

So how can young people (and older people) in coastal areas access higher quality jobs? And what can be done about the severe and longstanding NHS workforce shortages in most coastal areas? After all, educational outcomes are worse in seaside towns compared to urban settings.

Few jobs in seaside towns require graduate-level skills – take a look at the Nomis website, which shows employment opportunities by area. However, universities in the larger seaside towns and cities do train a range of healthcare professionals, from nurses to paramedics to doctors.

But not all seaside towns are the same. Brighton, once dilapidated and forlorn, built a digital and creative economy drawing on the ready supply of skilled labour from its two universities. This is not the kind of community the CMO Report is talking about – it’s not an option for Clacton, Hastings, Blackpool or Thanet..

Seaside towns: why living on the coast is linked to poor health – by a professor who grew up there

Why is living on the coast linked to poor health? | The Independent

To finish where we started, perhaps a bit of “creativity, unconventionality and misrule” is needed:

Banksy beside the seaside – Sidmouth Solarpunk