A competition which “celebrates churchyards which are managed to provide a peaceful haven for people and wildlife”.

To what extent should our cemeteries be havens for wildlife?

Well, the Devon Campaign to Protect Rural England thinks so, with its annual competition to find the most wildlife-friendly cemeteries in Devon:

Devon’s best graveyard has been named

It’s the third year of the competition which celebrates churchyards which are managed to provide a peaceful haven for people and wildlife. Each entry is visited by the judges and assessed on a range of criteria. They are not seeking the most pristine or manicured churchyards, but those which encourage biodiversity and offer something special to the local community. 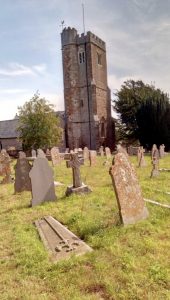 And in East Devon, East Budleigh has also been recognised:

East Budleigh’s churchyard is one of two recognised in regional conservation awards.

The awards celebrate churchyards which are managed to provide a peaceful haven for people and wildlife..

“The churchyards are all different, but every competition has to have  a winner and we judge what we see on the day we visit. “It was good to see that some of them had taken on board our comments from previous years and had acted on them: lots of bird boxes, bug hotels, new gates and signage.”

Churchyards praised for encouraging wildlife and biodiversity | Diocese of Exeter