And tonight, he’s looking at these options on Channel 4:

In a provocative documentary, environmental campaigner George Monbiot argues that the biggest problem driving us towards global disaster is how we feed ourselves, particularly on meat

This is the Mail’s take, which quotes from a letter from scientists to the Lancet last month:

Will farming be finished in 50 years? Lab-grown food could replace traditional crops and cattle to save the planet, claims George Monbiot documentary

Last month, scientists warned humans needed to drastically reduce the amount of meat they consumed over the 10 years to prevent climate change spiralling out of control.

In an open letter sent to the prestigious Lancet journal, a team of academics from around the world call on ‘high and middle income countries’ to hit ‘peak meat’ by 2030 as it is ‘necessary’ in order to halt the climate emergency.

Animal agriculture is one of the fastest growing contributors to global warming due to two factors – the carbon dioxide they emit and the forests being destroyed to create space for expanding farms. Of all farmland used to grow both crops and animals, more than 80 per cent of it is dedicated to livestock, but it produces only 18 per cent of the calories.

Cutting down on animal protein and dairy, especially red meat, would drastically reduce CO2 emissions and allows for trees to be planted to absorb some of the excess carbon dioxide in the air.

The letter has received the support of more than 50 leading academics around the world, including Professor Pete Smith, at the University of Aberdeen. ‘Ruminant meat is 10 to 100 times more damaging to the climate than plant-based food. As a planet, we need to transition away from a dependence on livestock, just as we need to to transition away from fossil fuels, if we are to have any chance of hitting the goals of the Paris climate agreement. Livestock numbers need to peak very soon and thereafter decline substantially.’

Will farming be finished in 50 years? Lab-grown food could replace traditional crops and cattle to save the planet, claims George Monbiot documentary | dailymail.co.uk

The farming industry is clearly not impressed: 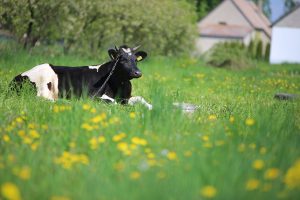 CONTROVERSIAL ENVIRONMENTAL campaigner George Monbiot has advised farmers to ‘get out now’, warning that the agricultural age is coming to an end and that the future is synthetic food.

At today’s Oxford Farming Conference, the question of feeding a growing population and addressing food security was never far from discussions. Defra secretary Theresa Villiers informed the delegates that the agricultural bill would be back on the table in the next fortnight with additional provisions on food security, insisting that farming would play a huge role in meeting these challenges.

She was questioned by audience member and farmer Tom Clark as to whether the government was on the side of farmers, referring to the rising anti-farming rhetoric in the climate change debate: “Does Defra understand farmers to be a resource and ally in the face of these challenges?”

The secretary replied: “Well managed sustainable livestock production can be beneficial in addressing climate change. Simplistic labelling of meat eating as negative for the planet when it comes to the standards we apply in this country is misleading.”

Warning issued over claimed finality of farming | The Scottish Farmer

Finally, just up the road at Buckfastleigh, Riverford has a helpful overview [the links below work]:

The debate around the climate impact of farming has been reignited after the former chief scientist to Defra said half of the UK’s farmland should be rewilded to help tackle the climate crisis.

Sir Ian Boyd told the Guardian that restoring 50 per cent of farmland into woodlands and natural habitat could mean the amount of cattle and sheep would fall by 90 per cent. He estimated this would result in 20 per cent less food being produced, which could be replaced by developing vertical farms, he said.

The comments put him in direct opposition with the National Farmers Union, which has set out plans for agriculture in the UK to reach net zero carbon emissions by 2040 without reducing livestock numbers.

Instead, the NFU said precision techniques, greater efficiencies, production of plant fuel on farms, and feed additives for cattle, would help the sector reduce and offset its carbon.

Globally, agriculture is estimated to contribute around 13 per cent of carbon emissions and a series of peer-reviewed studies have recommended reducing intensively-produced meat and dairy intake as one of the best ways to reduce carbon footprints. The UK’s farming sector has fought to demonstrate that its largely grass-based livestock systems have a much lower footprint due to carbon storage potential and lower inputs.

Responding to Boyd’s comments on twitter, NFU president Minette Batters said: “It took two world wars to realise the error of not being able to produce enough food for our island nation. I said [at the Oxford Farming Conference] last year you only turn the food production tap off once. We cannot make the same mistake again.”

Another farmer, Joe Stanley, tweeted that: “Rewilding 50% of GB farmland will just offshore our food production to countries with [lower]️ environmental standards.”

The debate is likely to escalate further with news of Channel 4’s upcoming documentary, Apocalypse Cow, due to air on 8 January and fronted by George Monbiot, a leading proponent of rewilding, which he said would set out how farming as we know it could end within decades.

In a recent interview with Wicked Leeks, Monbiot said food losses caused by less production in the UK due to rewilding could be mitigated by developments in lab-grown and cultured proteins, for foods like palm oil and fish. “It could be the crucial technological change that allows us to stop both climate and ecological breakdown,” he said.