Bristol Airport’s recent claim to be “net-zero”, by not including the emissions from flights.

Back in April, these news pages reported on a piece by Exeter academic James Dyke:

Here is an audio version of Dr Dyke’s piece in the Conversation:

They argue that they’ve arrived at the painful realisation that the idea of net zero has licensed a recklessly cavalier “burn now, pay later” approach which has seen carbon emissions continue to soar. It has also hastened the destruction of the natural world by increasing deforestation today, and greatly increases the risk of further devastation in the future.

Why the concept of net zero is a dangerous trap – podcast

This piece in yesterday’s Independent reiterates his concerns:

When does “zero” not mean “zero”? When an oil corporation, bank or airport are greenwashing with their “net-zero carbon” climate action plans, of course.

There are rising concerns that the phrase “net-zero carbon” has been hijacked and devalued by fossil-fuelled corporations. Thus, it was welcome that the UN’s High Champions on Climate, Nigel Topping and Gonzalo Munoz, staged a debate on the issue at the London Climate Action Week.

A powerful case was made by James Dyke from the Global Systems Institute at Exeter University that net-zero can be a dangerous trap that lulls the public into thinking that real action is being taken to address the emergency.

In fact, what appears to be happening is that many corporations and, in some cases, governments are concealing destructive fossil-fuelled business under the cloak of promises to be net-zero carbon by 2050. He argues they are banking on unproven carbon removal technologies to compensate – in the 2040s – for increasing emissions in the 2020s…

Dyke summed up these plans as “burn now and pay later”. He also passionately argued against the intergenerational injustice this represented – and quoted Bristol Airport’s recent (and, in my opinion, farcical) claim to be “net-zero”, by not including the emissions from flights.

He also cited Shell and Barclay’s recent net-zero 2050 plans, which allows them to continue ploughing billions into new fossil fuel investments over the coming decade.

When does ‘zero’ not mean ‘zero’? When it’s greenwashing, of course | The Independent

James Dyke wrote in this week’s i-newspaper about the devastating fires in North America:

He has a book out next month: 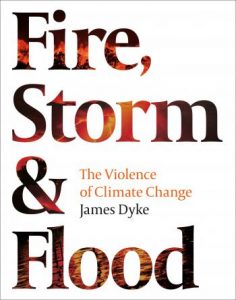 An unflinching photographic record of the epic effects of a violent climate, from the earliest extinction events to the present.

Violent geologic events have ravaged the Earth since time began, spanning the vast eons of our planet’s existence. These seismic phenomena have scored their marks in rock strata and been reflected in fossil records for future humanity to excavate and ponder. For most of the preceeding 78,000 years Homo sapiens simply observed natural climate upheaval. One hundred years ago, however, industrialization stunningly changed the rules, so that now most climate change is driven by us.

Fire, Storm and Flood is an unflinching photographic record of the epic effects of a violent climate, from the earliest extinction events to the present, in which we witness climate chaos forced by unnatural global warming. It uses often emotional and moving imagery to drive home the enormity of climatic events, offering a sweeping acknowledgment of our crowded planet’s heartbreaking vulnerability and show-stopping beauty.

With a launch in Southampton: