We have to be careful not to overdo the gloom-and-doom, as it can paralyse any response:

The psychology of climate change

However, we do have to take things seriously – and can surely work our way out:

The Bulletin of the Atomic Scientists are the people who set the Doomsday Clock – as covered this week by the Daily Mail:

Doomsday clock moves the closest to midnight in its 73-year history: Apocalypse predictor ticks forward twenty seconds amid rising fears from nuclear tensions and the threat of climate change 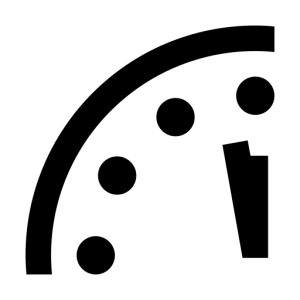 The Doomsday clock has ticked forwards 20 seconds and stands just 100 seconds to midnight – the closest in its 73-year history – due to increased nuclear tensions and climate change, bringing us closer to the apocalypse than ever before.

The clock was founded by the US scientists involved in the Manhattan Project that developed the world’s first nuclear weapons during World War 2. It is a symbolic countdown designed to represent the time to a possible global catastrophe and is maintained by scientists including 16 Nobel laureates. The group say the change – which is the closest the clock has ever been to the end of days – is due to the dual threats of nuclear war and climate change.

They said if countries worked to resist arms races, limit warming by restricting fossil fuels and create new ‘norms of behaviour’, the clock hands could be pushed back.

The threats of nuclear war and climate change are compounded by cyber-enabled information warfare, according to the Bulletin of Atomic Scientists. Officials identified cyber-based disinformation as a major setback for society, saying such campaigns sow distrust in institutions and internationally among nations. They say cyber information warfare also undercuts society’s ability to respond in an emergency situation, multiplying the problem.

Doomsday clock moves the closest to midnight in its 73-year history | dailymail.co.uk