The Futures Forum carries a lot of information on the alternatives to putting a ‘supergroyne’ off the Eastern Beach at Sidmouth: Here is a recent summary on the VGS news pages:

The consultants’ report from last year is actually not clear when it comes to its opinion about a low rock revetment:

Firstly, the report is equivocal about the protection that a low level revetment will provide. It compares it with the proposed ‘groyne and perfectly recharged beach’ option. Yet we know that the groyne and recharge option is much more expensive, and perhaps undeliverable.

Second, we know that recharge is not a perfect process. EDDC has consistently failed to recharge Main Beach in accordance with the 1990s scheme, despite the fact that Main Beach is more visible, much more used, and much more accessible. It is extremely unlikely that EDDC will maintain the ‘perfect’ beach with which the comparison is made.

Third, there is evidence that revetments do gather and retain shingle. This is ignored by the report.

Fourth, the revetment will deter/prevent people from going immediately under the cliffs, which is desirable.  Its not a problem – it’s a bonus!

Fifth, the groyne is inherently unsafe.

Sixth, the supergroyne is very obtrusive.

The question, therefore, is why the highly expensive supergroyne option has been favoured over a much cheaper permeable low rock revetment.

More from our correspondent:

The Cliff Road residents’ scheme was for a much higher degree of hard engineering than a lower rock revetment, which would be very similar to Seaton Hole and Branscombe, both of which have been approved.

As for funding, the cost of a low rock revetment is half a million pounds or less, which is very little by comparison with the Preferred Option. And ongoing costs will be dwarfed by the costs of regularly replenishing the beach which is part of the Preferred Option. Over the lifetime of the scheme, which is normally considered as 100 years, the replenishment costs will run into tens of millions, maybe more.

All Preferred Option calculations apparently assume that EDDC will replenish the entire beach regardless of cost whenever it is required. The same assumptions were made about our current scheme, and they have replenished… once since 1992. Our Main Beach has never been maintained to the design standard in 27 years. We could wait a year for the right conditions to allow replenishment to be undertaken, and then find the beach is gone the following day. That problem does not apply to a rock revetment. 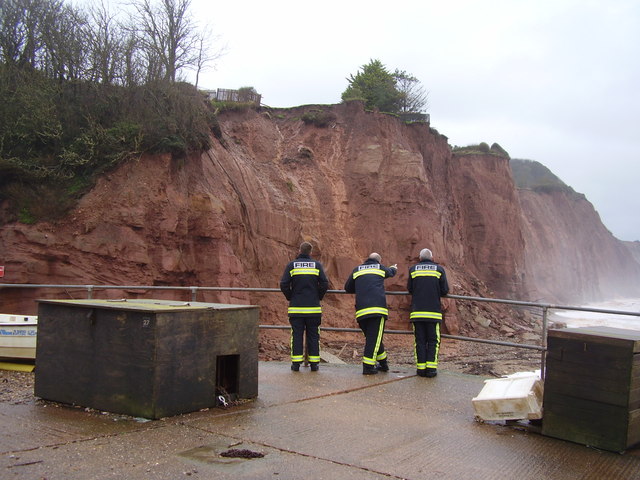 The Watch on watch © Anthony Vosper :: Geograph Britain and Ireland

A much cheaper option, the low rock revetment, is supported by the consultants  who have publicly stated that it will work better than the Preferred Option (the ‘supergroyne’), at about a tenth of the cost. We know with some confidence that it will work, simply because it works elsewhere, and has even worked very successfully at Pennington Point itself where a small emergency scheme was introduced 15 years ago.

Meanwhile, the understanding is that we do not have sufficient funds to proceed with the Preferred Option, and so a ‘revision’ was considered at today’s BMP steering group meeting:

It is clear that very few in Sidmouth wants to see the Preferred Option and most predict that it will be an expensive failure, with huge delivery issues with such a scheme: it is too expensive, too intrusive, clearly unsafe, difficult to deliver and maintain, and above all, unlikely to work.

In these circumstances, it is hardly surprising that ‘the locals’ are advocating a low level revetment.  It will be much safer ( it actually encourages people away from the cliffs ), hugely cheaper ( the initial cost will be half a million or less, and ongoing costs will not include recycling and recharging ), and less obtrusive than the supergroyne.

We also know that it is much more likely to work in reducing cliff erosion.

If we go back to what the earlier consultant proposed some 17 years ago:

It recommends a rock revetment along East Beach.

On page 2 the Aims state:

“English Nature have specified that due to the international designations which protect this site, a scheme will only be considered if it does not completely stop erosion.  In order to comply with English Nature, it is proposed that a revetment be constructed with a crest level that would allow some overtopping – ideally the revetment should simulate the same conditions at the cliff toe that would prevail with a full beach fronting the cliffs.”

On page 13 the conclusions state:

“A revetment with a crest level of 3.5 metres ODN constructed within the range of 0 to 15 metres from the cliff face would simulate the conditions that prevailed under the interpreted 1987 beach conditions.”

and the recommendations state:

“A revetment of varying height be constructed along the frontage. A crest of 4.0 metres ODN at the western end (Pennington Point), where the frontage is more susceptible to cliff falls, tapering to 3.5 metres ODN over the remaining frontage.”

Here is the planning application for EDDC’s own rock revetment proposal for East Beach, East Devon Planning Application No. 03/P0033: ( this has now been withdrawn)

Finally, this is what Natural England has had to say, as reported by EDDC in response to questions from the Steering Group: