“The budget included a tree-planting programme, a tax on plastic use and investment in electric car chargers – but these seem pretty cosmetic in the context of the vast amount of carbon emissions resulting from new-build construction.”

The day after the budget, something called ‘permitted development rights’ was extended – much to the consternation of the Architects’ Journal:

The government has announced it is widening controversial permitted development rights so developers can demolish empty buildings and replace them with new-build housing – without planning permission. The new permitted development right (PDR) was one of a number of ‘planning freedoms’ aimed at speeding up housing delivery announced in the Commons today by housing secretary Robert Jenrick.

Reacting to the planning announcement, the Royal Institution of Chartered Surveyors (RICS) said given its net-zero commitment, it was ‘bizarre’ that the government was proposing making it easier to demolish existing buildings instead of retrofitting. ‘It isn’t green or sustainable for our planet … something ministers have been repeatedly told,’

This was echoed by the RIBA’s executive director of professional services, Adrian Dobson, who said there was a ‘fundamental contradiction’ between the government’s professed commitment to quality and its plans to further expand permitted development… Rather than driving a “green housing revolution”, the government’s plans to allow the demolition and replacement of industrial and commercial property with housing under permitted development would make it easier to build the slums of the future.’

Here is an even more stinging consideration from the AJ:

Is it possible those in government are not keen readers of the Architects’ Journal? Our RetroFirst campaign has called for government action to encourage the reuse of existing buildings rather than demolishing them and rebuilding – a process that causes far more damage to the environment.

But this week’s budget seems to have done the very opposite. Perhaps predictably, chancellor Rishi Sunak sat on his hands regarding the tax discrepancy whereby VAT is charged on most refurbishment work, while new-build is usually zero-rated.

Then the next day, housing secretary Robert Jenrick announced an extension of the permitted development rights rules so that ‘vacant commercial buildings, industrial buildings and residential blocks’ can be demolished and replaced with new-build residential units without going through the usual planning process.

None of this sits well with tackling the climate emergency. The budget included a tree-planting programme, a tax on plastic use and investment in electric car chargers – but these seem pretty cosmetic in the context of the vast amount of carbon emissions resulting from new-build construction.

It does, however, seem in keeping with Boris Johnson’s overarching strategy for the next few years: to boost the economy through a massive £600 billion investment in infrastructure, including £12 billion for the Affordable Homes Programme.

The upshot is that this budget could be good news for the workloads of architects and the construction industry generally, but dreadful news for the planet.

Meanwhile, in another section of the AJ, there has been further stinging criticism of the government’s lack of commitment to green building: 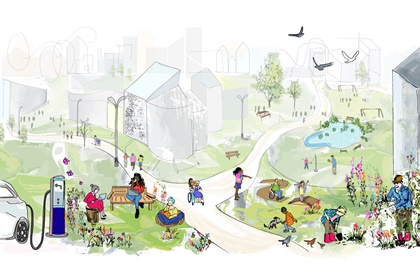 If the government really wanted to reduce the enormous contribution of the built environment to greenhouse gas emissions, they’d be announcing a huge retrofit initiative, complete with gas boiler scrappage and zero-rated refurbishment. Or a scheme to protect the livelihoods of the millions of steel and concrete workers whose jobs become precarious in a low-carbon construction industry. Or some robust legislation requiring all development to be low-carbon. But instead, they’ve announced a design competition, dubbed ‘Home of 2030’ – to generate cheap media content and the appearance of action.

This competition is an attempt to create a good news story: here are some artists’ impressions of what an eco-utopia could look like. Well, those images will bear about as much resemblance to what life will look like under current government policy on tackling climate and social injustices as a teenager’s Instagram feed does to their inner emotional life. It is an attempt to distract us, to make us architects feel like we’re doing our bit by scribbling away at two in the morning on an unpaid ideas competition while the government is pushing through the Future Homes Standard. Scrapping fabric energy efficiency, removing local powers to set higher energy efficiency standards, not measuring the actual performance of buildings, and not including up-front embodied carbon, the Future Homes Standard is a tragedy. Both these initiatives are from the same playbook: all-fur-coat-and-no-knickers policy designed to look like progress while actually further entrenching business as usual.