“Britain is off the graph for centralisation. Its local government now has a mere 1.6% of GDP for its spending, against 6% in Germany, 12% in France and 15% in Sweden. In the eye of Whitehall, anything beyond London is now “regional”, never local.”

Local government has been largely hollowed out in the UK:

Futures Forum: The assault on Local Government: The Strange Death of Municipal England

Largely because it has been starved of funding:

Futures Forum: “Local authorities are going to become increasingly dependent on business rates and yet by so doing they will potentially drive up the costs of healthcare in their localities.”

Futures Forum: Councils are facing the biggest cuts to government funding since 2010 despite unprecedented pressure and demand, which could risk “tipping many over the edge”

There’s not much in this week’s budget for local government – apart from a bit of spending on transport for the eight regional Mayors:

Local government had been hoping for more a week ago:

Starting with Phil Tomlinson, Professor in Industrial Strategy at the University of Bath, writing in The Conversation:

There is no easy fix when it comes to reviving lagging regions. New money for infrastructure projects will only go so far. Renewal also requires investment in better skills, support for business and knowledge networks, strong local public services and good local government. Many of these have been significantly weakened through a decade of austerity cuts.

The abolition of business rates for small firms will be welcome, especially for those in retail in struggling towns and city centres. Most of this revenue goes to local councils – and it will be interesting to see if they will be compensated by central government.

Under austerity, health spending and the aid budget (administered by the Department for International Development) were protected in inflation-adjusted terms. But almost every other Whitehall department has suffered deep cuts in day-to-day spending budgets. The hardest hit has been the local government department, which has had a real terms cut of 77 per cent per capita.

Budget 2020: A decade of UK tax and spending in six charts | independent.co.uk

This refers to a thorough study from the Resolution Foundation – updated since its publication last year: 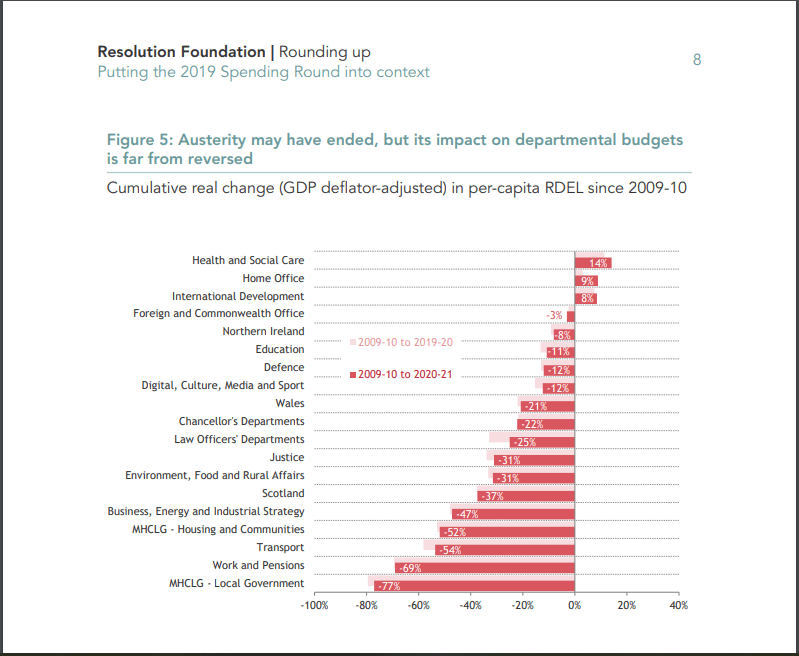 Rounding up: Putting the 2019 Spending Round into context | resolutionfoundation.org

Simon Jenkins writing in today’s Guardian is, unsurprisingly, very critical of the budget – and how central government is happily spending, but not allowing local government that luxury:

As for local government, there was to be no let-up in austerity. While “our” NHS is to roll in cash, local government’s share of the welfare state, social care and social services got nothing extra. There was no mention of old people or family support or youth clubs: chief victims of the 30% cut in local council spending since 2010. Downward pressure will continue on libraries, day centres, sports fields, drug rehabilitation and facilities for young people.

Central government can borrow and spend at will. Local government is allowed no such liberality for its services. There was no whisper from Sunak of a let-up in rate capping, no new sources of local revenue, no hope of council tax revaluation. If cuts continue, they are not central government’s responsibility. Blame your hapless, wasteful local council.

I cannot imagine any other country, democracy or dictatorship, where the centre would so obsessively micromanage its public sector. Britain is off the graph for centralisation. Its local government now has a mere 1.6% of GDP for its spending, against 6% in Germany, 12% in France and 15% in Sweden. In the eye of Whitehall, anything beyond London is now “regional”, never local.

The new elected metro-mayors were carefully assigned “regions” not cities, lest they over-identify and go native. They depend not on accountable local taxes but on Treasury handouts. As Professor Tony Travers of LSE puts it: “Devolution means mayors are allowed an opportunity to talk to the Treasury about how to spend money.” They are Whitehall agents.

Johnson’s egocentric budget gives him everything and local councils nothing | theguardian.com