The beauty commission’s report is full of welcome ideas: now we need to act on them

Is ‘beauty’ a rather old-fashioned notion?

On the publication of an interim report, over a year ago, by an independent commission looking into building design, some thought so:

Futures Forum: The government’s new Building Better, Building Beautiful Commission >>> “This is the same old binary argument about traditional rather than contemporary architecture, which feels like a tedious hangover from the 1980s, a pantomime Prince Charles speech reverberating forever,.”

Whereas others were more open to the idea: 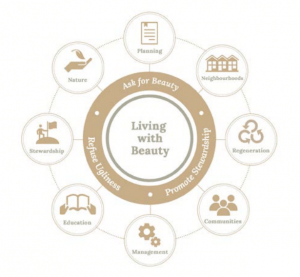 The final report has been published today:

The info-graphic on the right comes from the introduction to the report – and shows the ‘Eight priorities for reform’:

In the Sunday Telegraph, the Housing Secretary paid tribute to Roger Scrutton, who led the commission:

We’ll make it easier to build beautiful homes, to end the myth that quality is the enemy of supply

Readers of the Sunday Telegraph will rightly mourn the loss of Sir Roger Scruton. He was that rare thing; a man of action and a man of words. His support for freedom fighters in Eastern Europe demonstrated his willingness to risk his own safety for his ideals. Even in the final stages of his illness, Sir Roger was contributing new ideas to turn the tide on thoughtless development.

There were few subjects that he did not turn his mind to, and his work on the Building Better, Building Beautiful Commission, whose final report will be published on Thursday, will stand as part of his enormously rich legacy.

At the heart of the report is the contention that a sense of place still matters. In our fast paced, globalised world, identity remains important, perhaps more so than ever, and most of us seek to live in a strong community, imbued with history, pride and beauty. And that theme runs through the heart of this new Conservative Government….

We’ll make it easier to build beautiful homes, to end the myth that quality is the enemy of supply | telegraph.co.uk

Meanwhile, the Sun also writes on the report:

EVERY newbuild home should come with access to a fruit tree in a bid to reconnect children with the sources of their food, a government-backed report has suggested. Bird and bee boxes should also be included in the design of newbuild homes, according to the final report by the Building Better Building Beautiful Commission.

The report contains over 130 practical recommendations that will guide the Government’s reforms of the planning system that will ensure future homes boost people’s quality of life.

The Commission was co-chaired by the influential former government adviser Sir Roger Scruton, who died earlier this month from cancer.

The findings of the report, to be launched by his co-chair Nicholas Boys Smith, also urges the Government to open old canals as part of initiatives to connect communities to nature and the outdoors. And recommends increasing the use of digital technology like virtual reality and 3D modelling to help locals shape their own areas…

Newbuild homes should have access to a fruit tree to reconnect children with nature, report says | thesun.co.uk

And, naturally, the professional press has taken a lot of interest:

Beauty commission report: fast-track planning for beauty and fruit trees for all

The Building Better, Building Beautiful Commission’s final report has called for a range of measures to ‘end ugliness’ including the reform of architectural education, a planning ’fast track for beauty’ and the mass planting of urban orchards

The 180-page Living with Beauty report, led by the late academic Roger Scruton and Create Streets founder Nicholas Boys Smith, makes no fewer than 45 policy propositions for how to make beautiful homes ‘the norm’. The government-commissioned report took over a year to produce and involved interviews with over 150 experts and visits to 20 housing schemes across the country including the Stirling Prize-winning Accordia and Mole Architects’ Marmalade Lane in Cambridge.

It makes a series of wide-ranging recommendations from reducing VAT on retrofit projects – a key demand of the AJ’s RetroFirst campaign – to making architectural education more practical. Its findings have been welcomed by housing secretary Robert Jenrick.

The document also calls for reform of procurement, the introduction of minimum standards for permitted development rights (PDR) and a ‘fast track’ planning system, allowing quicker approvals for well-designed developments.

It argues that the greatest ‘aesthetic offences’ – for example, it says, Rafael Viñoly’s Walkie Talkie – have been committed in places where there is no resident community to oppose them and argues for greater community involvement through charrettes or the Australian model of planning juries.

As with the interim report, Living with Beauty recommends ‘humane densification’ rather than high-rise towers and advocates Create Streets’ preferred model of mid-rise blocks, streets, squares and buildings with ‘clear backs and fronts’.

But its sections on the negative influence of modern architecture bear the clear stamp of Scruton, who was reinstated to the commission in July after being sacked from his post, and his profound dislike of ’the modernist vernacular’. The report argues there is a ‘great divorce’ between what the general public likes and what architects and developers have provided. This gap between ‘popular taste and professional advocacy’ was caused, among other things, by the influence of the modern movement and ‘guided by Le Corbusier, the Bauhaus and the Russian Constructivists’, the report says.

It adds: ‘We admire much that they achieved. But they were a dominating force, whose influence far surpassed the reasons given in support of it. Their campaign against “pastiche” and “historicism” has intimidated planners and led to the uniform production of unadaptable boxes, supposedly expressive of the “spirit of the age”, rather than streets lined by neighbourly frontages and façades.’

This could be tackled, the report argues, by overhauling architectural education which often fails to give students sufficient grounding in the general public’s preferences, the ‘empirical connections between built form and well-being’ and the ‘art of integrating new buildings into the historic fabric of a settlement’…

Beauty commission report: fast-track planning for beauty and fruit trees for all | architectsjournal.co.uk

The beauty commission’s report is full of welcome ideas, writes Elizabeth Hopkirk. Now the government needs to act on them

… Beauty was always going to be a tricky subject for an objective report commissioned to tell ministers how to make building lots of houses more palatable to the public. The then housing secretary James Brokenshire (or his advisors at Policy Exchange) correctly identified that the aesthetics of new developments plays a significant role in whether they attract the paralysing wrath of Nimbys.

He set up a commission called Building Better, Building Beautiful and then appointed Roger Scruton, a philosopher with much to say on beauty, to chair it. In the eyes of most architects, each of these acts was akin to lobbing a hand grenade into the debate. But at the same time they recognised a rare opportunity to engage with a government that appeared to be genuinely interested in making housing better. Last week’s national housing audit demonstrates for any deniers how execrable most of our housing currently is. The reopened Grenfell inquiry provides an even more sobering lesson.

To be fair to both sides (as they could originally be characterised) the architects rolled up their sleeves and the commissioners listened to them. The profession’s reasonably warm reception to today’s report shows the “sides” have become blurred.

Living With Beauty, published just weeks after Scruton’s death, can’t resist dragging style wars into its commentary in places. But to their credit the commissioners were quick to understand that beauty is about far more than the look of individual buildings – and that achieving it requires far more than hiring a traditional architect.

The report is full of sensible practical suggestions such as using more visual and digital means to engage the public early in a project’s life, upskilling planning departments and committees and ending the ludicrous VAT incentive not to refurbish, as well as appointing champions of place in every local authority and even giving one a seat at cabinet.

Sound familiar? Well yes: versions of quite a lot of the recommendations were in Terry Farrell’s review carried out for the coalition. Only a handful of his 60 recommendations were ever implemented. Can we have any confidence that the similarly admirable Scruton report will fare any better? There are just as many powerful vested interests ranged against it…

On the eve of Brexit we urgently need a more humane development system | bdonline.co.uk