… if we take into account the food intake needed to cycle, or drive, or walk.

Many of us have been doing a lot of walking of late.

But, as a piece in the Daily Mail suggests, maybe it would be better to cycle, or even to share the car-ride when we get back to work: 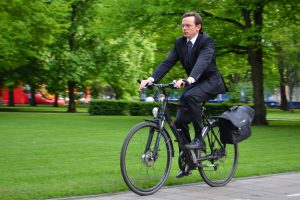 It may have many health benefits including cutting the risk of catching coronavirus. But walking to work could produce more greenhouse gas than driving, a study has found.

The carbon footprint of producing the extra food a walker needs as ‘fuel’ for the journey would be more than that of a car travelling the same distance. Researchers estimate that, in a country with high calorie diets such as the UK, walking for one kilometre would require food that would have generated around 0.26kg of carbon dioxide compared with 0.21kg of CO2 for the petrol used by a car. The scientists, from Otago University in New Zealand and Oxford University, said a carshare scheme over short distances could produce less greenhouse gas than one person walking.

Cycling was more energy efficient than either…

Walking to work is BAD for the environment… because it makes you eat more, new study shows | Daily Mail Online

It does depend how these things are reported…

Active modes of travel are not “zero emitters” when it comes to greenhouse gases, according to a new study. Researchers conclude that while cycling is better than walking, active travel may result in people eating more. This could mean that switching from driving to car-sharing could reduce emissions more than switching from driving to walking. (But it probably doesn’t.)

While conceding that, “studies of active transport do not currently provide us with definitive information on the extent or nature of compensatory food intake in response to increased walking and cycling,” researchers assume that a person who shifts from a passive mode of transport (e.g. driving) will eat a little more.

They base their calculations about the emissions cost of this on Mike Berners-Lee’s 2010 book, The Carbon Footprint of Everything. This estimated that a mile cycled in the United Kingdom generates emissions of between 65 gCO2e and 2,800 gCO2e, depending on what the journey was powered by (bananas or air-freighted asparagus).

Clarifying this detail, they write: “The notion that energy expended from a cycle ride may be substituted directly by air-freighted asparagus is far-fetched, but underlines the point that there is a high carbon cost of modern food systems.”

In reality, the study only really concludes that emissions from food required for walking and cycling are “not negligible” in economically developed countries and that they should therefore be considered when estimating net-emissions impacts from transport interventions.

Cycling is better than walking (or car sharing) when it comes to saving the planet finds study | road.cc