Looking back over a half-century of green campaigning.

It is now five years since the former leader of Friends of the Earth visited Sidmouth as part of the Arboretum’s Tree Day celebrations:

Futures Forum: Climate change: Jonathan Porritt, the Forum for the Future and ‘The World We Made’

And it is almost exactly a year since XR happened in Sidmouth:

This evening’s Costing the Earth on Radio 4 looks at the effectiveness of demonstrations and campaigns – in a programme which features both Porritt and XR: 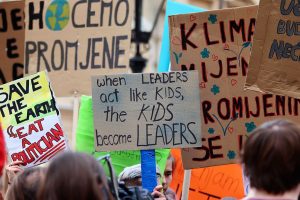 A short history of environmental protest

It’s fifty years since the first blossoming of environmental campaign groups. Friends of the Earth, Greenpeace and the organisation which was eventually to become the Green Party were all set up in the early 1970s – all within just a few years of each other.

In part 1 of this two-part series, Tom Heap takes a look back over the last half century of environmental protest. He talks to some of the big names involved in green campaigning – from the early days up to the present and the rise of Extinction Rebellion. He asks what the movement has achieved and what challenges still lie ahead.