We are often told we should be panicking about Climate Change, or ‘turning into a Third World Country‘, or dying of the infection of choice on that particular day, or any other of the catastrophising headlines created by media hype; yet the medical world spends a lot of its time trying to combat catastrophic thinking. From informed consent to psychiatric intervention it is acknowledged that rational understanding of risks is a very large part of a healthy and functional person. Catastrophising also increases physical pain while self belief (understanding that you are not helpless) can reduce it.

Anxiety disorders plague our society from children through to old age, and it is far more prevalent in affluent societies like ours than it is in poorer countries where people have more reason to be anxious. We are urged to counter it with pills and mindfulness ( Introduction here) and yet it is impossible to do so because we ( in this country) are constantly being told that we and/or our loved ones are at risk, when in reality we have greater good health and prosperity than ever before in history.

Even up to the middle of the 20th century people worried about their children dying of childhood disease, now we worry about them being picked on at school for not having the current fashionable items. Our worry is understandable as we have a strong drive to protect our children and anxiety occurs when we can’t, but our anxiety can heighten theirs.

We get articles and videos which tell us how to stop indulging in catastrophic thinking or how to deal with it, and then the same media outlets turn round and produce scare stories; from research which stating is accurate concerns but not disastrous conclusions.

Is there any wonder we are increasingly unable to make rational judgements and instead try to seek reassurance by becoming part of one clearly defined group or another? The problems with this response are of course many, not least that it leads to hatred of those who think differently … which leads to violence and ultimately wars. It makes our intolerance an acceptable position where in fact the only acceptable position is to assemble facts as clearly as we can and strip the spin from them. Just as we are sceptical of what we are told by advertisers because we know they are trying to manipulate us we need to be resistant to manipulation in other situations.

UK life expectancy reports in The Daily Mail, The Telegraph, The Guardian, the BBC from 2018, inews, all these fail to say what the base ages are for various countries from which the increase is calculated (no other newspapers had reported on this at the time of writing). Percentage increases on an already high expectancy are different to those on a low expectancy.
Actual research report.

Climate Change report from Climate Central as reported in The Daily Mail, The Telegraph, The Guardian, The Financial Times, the BBC, Sky News,
Actual research report.   This report is talking about annual flooding not being permanently underwater; below the High Tide mark means that on the very highest tides flooding will occur, not that it will occur at high tide twice every day.

One of the best things you can do for future of your developing child is to teach them not to repeat, or even believe, what they are told until they have critically evaluated it by learning about the opposite view point, or read the research of people with different viewpoints.This can be done in a simple fashion from the time they start school beginning with things like should Peppa Pig believe what George tells her?

If you have a friend who is in fear and despair because of the hyped up terms and headlines used to sell news then try to help them replace emotive terms with those less emotional, perhaps ‘it’s annoying’ for ‘its a catastrophe’? Or ‘We need to see what we can do to make things better’ for ‘We’re all doomed’!
It can be fun to go through a news report and take out all the exaggerated, ‘hysterical’ terms, and good for you too.

See also an earlier piece on the VGS news pages: 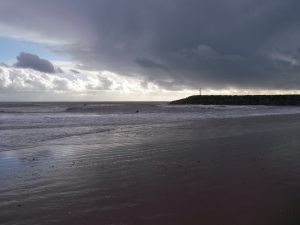