Caz Graham finds out whether there might be environmental alternatives to building ever-higher flood defences. She talks to a campaign group in Kendal in Cumbria, where there are multi-million pound plans to build flood barriers through the town centre, and asks the Environment Agency whether there could be more imaginative alternatives.

Is Natural Flood Management the answer? Caz talks to academics and experts to find out what new solutions there might be, and what other countries are doing.

Flooding from the sea:

At the other end of the country, there are questions about ‘building ever-higher flood defences’:

And ‘multi-million pound plans to build flood barriers’ against the sea are being questioned in these parts too:

But if we look at flood defences for rivers in the West Country, there does seem to be a fresher approach.

This project is not without controversy – and there’s quite a debate here:

With the last comment from the District Council’s environment portfolio holder:

The Lower Otter is a manmade artificial landscape and this scheme is simply helping nature to correct what we now understand was a mistake. So let’s not make another mistake and lose the chance to put back what nature intended.

The epithet ‘rewilding’ has become controversial – and perhaps should be avoided:

Rewilding seeks to reinstate natural processes and, where appropriate, missing species – allowing them to shape the landscape and the habitats within.

But it does have its financial benefits:

Councils and insurance companies calculate what re-naturalising rivers and restoring floodplains and watersheds can save them in terms of flood-damage costs.

Earlier this evening, the documentary film maker Simon Reeve was in Cornwall:

Travelling inland from the beautiful coast, Simon crosses a county of stunning moorlands. Agriculture is still Cornwall’s biggest employer, and there are exciting new visions for how less intensive forms of farming could be more profitable and environmentally friendly. Simon also discovers the rewilding project where reforesting uplands and introducing beavers promise to tackle the problem of widespread flooding.

And BBC Two’s AutumnWatch from a couple of years ago was in Cornwall:

Meanwhile, in Devon in August this year:

On the River Otter: beavers here to stay – Vision Group for Sidmouth

With the final word from the Mail from earlier in the year:

Research by the team of scientists, overseen by Professor Richard Brazier from the University of Exeter, found they are providing benefits to people, including in the flood-prone community of East Budleigh. Beavers have constructed six dams upstream of the village, which have measurably and significantly reduced peak flood flows through the community, the report said… 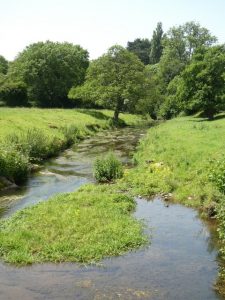 Meanwhile, on the River Sid:

A Walk along the Sid Valley – Explore Devon