Solar panels and bumblebees in an expanding ‘business park’

Or building an eco-home and working the land

There’s a nice ‘business park’ just outside Willand, near Cullupton in Mid Devon:

Hitchcocks Business Park | A family-owned business park set in 90-acres of Devon countryside and only minutes from the M5.

And it’s about to expand quite considerably, because… it has to:

It’s been given planning permission to get bigger:

Which also means lots of jobs: 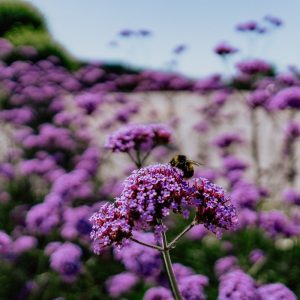 What’s striking about the website of the ‘business park’ is that the photography depicts lots of trees and a bumblebee enjoying some verbena (although the website calls it ‘lavender’: see photo on the right)

Moreover, the applicant for planning permission states that the site would help achieve net-zero development. “We want to invest in as much solar as we can and try and stop people driving out of the area to go to work.”

However, a petition notes that this isn’t exactly ‘green’:

(1) The plan stands in stark contrast to county and national policies to avoid building on Greenfield land and contrasts bluntly to recent promises of working towards a zero emissions economy.

(2) The plan would contribute to a permanent change to the character of the local area: from rural tranquillity to an industrial landscape…

It was into this ‘rural tranquility’ that the Mason family moved some six years ago, as reported on the Futures Forum blog back then:

And this evening, Ben Fogle made a return journey to see how they were going:

But as today’s Daily Mail notes, things are not going too well – and through no fault of their own:

The not so Good Life! Couple who quit their council estate and spent years fighting to build a country eco-home say their new life has been ‘hard and monotonous’ – and now an industrial estate is being built on their doorstep

Ben notes the smell in the air coming from the nearby ‘business park’:

In contrast to this expanding nearby development, the Mason’s set up seems to be the real ‘net-zero development’:

In 2015, Dinah and Stig were laying the foundation for their future eco-friendly home and hoped to be completely self-sufficient…

With brutal honesty, Dinah admits the dream she’s chased for so long has left her exhausted and isn’t everything she thought it would be, while an industrial estate being built nearby threatens their peace and tranquility.

Perhaps they should have chosen mid Wales rather than Mid Devon:

… a groundbreaking Welsh government scheme under which people get to circumvent tight planning rules so long as they build an eco-home in the countryside and go back to working the land on which it sits. The “One Planet Development Policy” was adopted by the Welsh government in 2011…

The aim is ambitious: In a small country where people on average use three times their fair share of the world’s resources, Wales wants its One Planet people to use only the resources they are due. Which means a simpler smallholding life, spending and travelling less, growing and making more.

A spokesman for the Welsh government said the scheme was an important niche initiative, rather than a model to scale up. “It is intended to provide an opportunity for those wishing to live a highly sustainable lifestyle, project a light touch on the environment, and who will be largely self-sufficient in terms of income, food, and energy,”

One Planet Development in Wales | One Planet Centre

But, then, Wales seems to be quite adventurous:

Get help to build a home (Self Build Wales)  | GOV.WALES