The EU has just agreed to a big trade deal with South America – but not everyone is happy, especially when it comes to beef:

‘There will always be beef farming but the future is in quality, not quantity’ | Irish Independent

Meanwhile, there is interest in what happens after Brexit:

The EU insists any deal will give them leverage:

The Mercosur-EU trade deal, if approved, would give the EU more influence in preventing deforestation in Brazil, European Commission vice-president Jyrki Katainen said Tuesday (23 July). He defended the trade agreement which the commission negotiated with Mercosur, which consists of Argentina, Brazil, Paraguay, and Uruguay.

“I’m very well aware there are many people saying we should not have Mercosur trade agreement with the EU because of deforestation impact. We all know that there has been serious issues in Mercosur countries, especially in Brazil, when it comes to rainforest degradation,” said Katainen.

At the centre of Brazil’s – indeed, the world’s – meat industry is a company you won’t have heard of – and the Wikipedia entry doesn’t say very much apart from the usual PR:

JBS S.A. is a Brazilian company that is the largest (by sales) meat processing company in the world, producing factory processed beef, chicken and pork, and also selling by-products from the processing of these meats.

“The company is so large it is difficult to avoid for those who eat meat.” And it has been involved in a huge amount of scandal over the years:

In May of this year, Friends of the Earth produced a bit of research, as reported by the Independent:

British supermarkets are selling corned beef from a company accused of involvement in illegal deforestation in the Amazon, according to environmental investigators.

Morrisons, Waitrose, Iceland, Lidl and the Co-Op all buy Brazilian corned beef sourced from JBS, a meat company that has reportedly sourced cattle from farms contributing to destruction of the world’s largest rainforest. Environmental organisation Friends of the Earth said it made the apparent link by tracing the supply chains of tinned corned beef sold in British supermarkets under their own labels or other meat brands’. At the same time, research group Earthsight said it found Sainsbury’s and Asda, as well as Morrisons and Lidl, still stocked JBS products.

Brazil has the greatest diversity of animal and plant species worldwide but has lost more forests than any other country since 2001 – 1.3 million hectares last year alone, more than double the loss in its nearest rival, Indonesia – according to the World Resources Institute. The Amazon is also critical in helping mitigate climate change by absorbing large amounts of carbon emissions but about a fifth of it has already been cut down. Nearly 80 per cent of deforested areas in Brazil are now used for crops to feed cattle, according to Greenpeace.

With a little more here:

And earlier this month, more came out after very extensive research from the Guardian and the Bureau of Investigative Journalism:

As reported by the Guardian’s global environment editor:

We must not barter the Amazon rainforest for burgers and steaks

European leaders have thrown the Amazon rainforest under a Volkswagen bus in a massive cows-for-cars trade deal with Brazil and three other South American nations.

The EU-Mercosur agreement – the largest in Europe’s history, according to officials – will make it cheaper for Brazilian farmers to export agricultural products, particularly beef, despite growing evidence that cattle ranching is the primary driver of deforestation.

And one company in particular will be doing very well, as covered by the BIJ:

JBS: The Brazilian butchers who took over the world 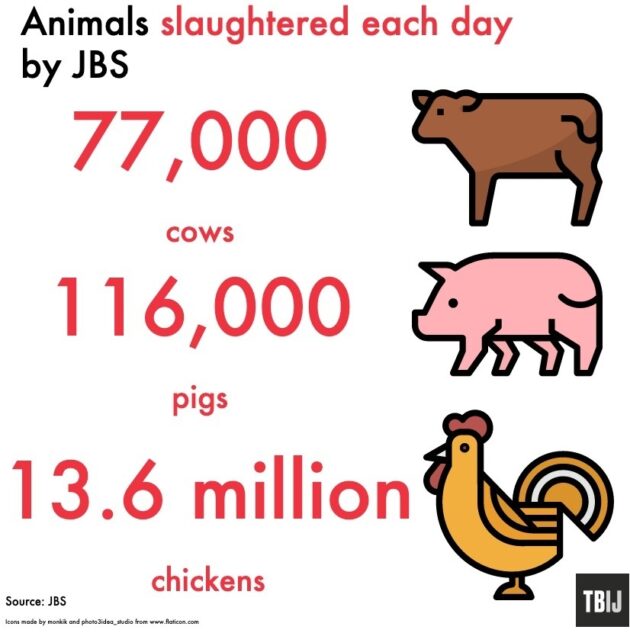 JBS: The Brazilian butchers who took over the world

And it’s not just beef: