“The message is that we need to find a way to transform ourselves from a representative into a participatory democracy… The Swiss have shown it can be done and the technology can be there readily.”

There have been some limited attempts at ‘participatory budgeting’ in East Devon over the past years: 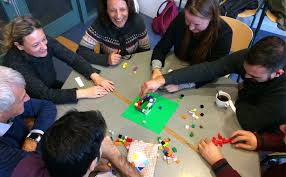 Meanwhile, the citizens’ assembly on climate, convened by parliament, has just published its findings – although the UK government is not obliged to adopt any of these:

On the other hand, in Scotland, all local authorities allow residents to set part of their budgets – even though it’s very little:

Unless the results of participatory democracy can be translated into policy, and unless it operates at a meaningful scale, it generates cynicism and disillusion. But as the processes in Ireland, Madrid and in some Brazilian cities have shown, when people are allowed to make big and frequent decisions, the results can be transformative. Alienated, polarised populations come together to identify and solve their common problems. Democracy becomes a lived reality.

Nowhere has participatory politics yet been allowed to fulfil its promise. There is no principled or technical reason why the majority of a municipal or national budget should not be set through public deliberation, following techniques pioneered in the Brazilian city of Porto Alegre. There is no principled or technical reason why the monthly voting process for improving life in Reykjavik could not be applied at the national level, everywhere. The call for full-scale participatory democracy is as revolutionary as the call for the universal franchise was in the 19th century. What is needed is a vehicle similar in scale to the Chartist and suffragette movements.

Participatory politics and the point of parliament | Climate change | The Guardian

What we have is government which has not kept pace with the changes in our people. We are better informed, more conscious of our individuality and freer to push our opinions publicly due to the internet than previous generations. We expect our voices to be heard and we are less tolerant of the ‘Whitehall knows best’ attitude which elites still believe should insulate them from hoi polloi.

The message is that we need to find a way to transform ourselves from a representative into a participatory democracy while still retaining the kind of coherent government provided by four- to five-year parliaments. The Swiss have shown it can be done and the technology can be there readily.

And the Futures Forum has also looked at several projects over the years:

Futures Forum: Asking the community how to spend their money

Futures Forum: Elections are for aristocrats

Futures Forum: Preston: Post Brexit city – Co-operatives for an Age of Crisis > How the ‘Preston Model’ is boosting the local economy

Futures Forum: Citizens’ Juries could become the core of a revived local democracy

Futures Forum: The government’s “civil society strategy” will not give people “a more direct role in decision making.” > Rather, we need a real dose of ‘deliberative’ or ‘participatory’ democracy.