“The 3D printing method is seen by many within the construction industry as a way to cut costs and environmental damage by reducing the amount of cement that is used.”

There are some very innovative ideas out there for housing – as reported earlier in the year:

A recent collaboration between the team of Mario Cucinella Architects (MC A) and WASP, specialists in 3D Printing in Italy, has resulted in the first 3D-printed construction of a fully natural, recyclable, and carbon-neutral material: raw earth. The circular housing prototype is called TECLA and it was built in Massa Lombarda (Ravenna, Italy) using multiple 3D printers synchronized to work at the same time.

Dig then print your own house – Vision Group for Sidmouth 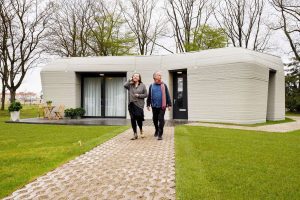 Meanwhile in the Netherlands:

With more from the weekend Guardian:

A Dutch couple have become Europe’s first tenants of a fully 3D printed house in a development that its backers believe will open up a world of choice in the shape and style of the homes of the future.

Inspired by the shape of a boulder, the dimensions of which would be difficult and expensive to construct using traditional methods, the property is the first of five homes planned by the construction firm Saint-Gobain Weber Beamix for a plot of land by the Beatrix canal in the Eindhoven suburb of Bosrijk…

In the last two years properties partly constructed by 3D printing have been built in France and the US, and nascent projects are proliferating around the world. But those behind the Dutch house, which boasts 94sq meters of living space, are said to have pipped their rivals to the post by being the first legally habitable and commercially rented property where the load-bearing walls have been made using a 3D printer nozzle…

But while it is early days, the 3D printing method is seen by many within the construction industry as a way to cut costs and environmental damage by reducing the amount of cement that is used…