“Virtual Fixit Clinics are emphasizing what remote repair does best. That is: assembling a large number of repairers to work together, providing repair to places where there is no local Repair Café, and repairing things that are too large to bring to an in-person event.”

Like its sister groups, the Sidmouth Repair Café had to shut up shop earlier in the year – but is looking at how to reopen:

Many Repair Café’s are going on-line. As one correspondent reminds us:

“So much of life is now being transferred online and although it feels that a Repair Café should be ‘hands-on’, if the ethos is all about showing people what to do rather than doing it for them, then watching a fixer suggest how to repair something the owner has actually got in their own hands might be a way to go anyway…

And there are lots of examples out there… 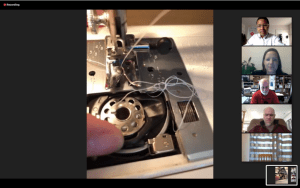 In the States and in Sweden:

In California, online fixing is seen as a real positive:

In addition to RepairCafe.TV, there are also virtual Fixit Clinics. Fixit Clinics in the United States is an initiative of Peter Mui. He has been organizing his clinics for about ten years in more and more places in the US. In recent months, he has held seven virtual meetings via Zoom (which, by the way, are also being announced via RepairCafe.TV).

“Virtual Fixit Clinics are emphasizing what remote repair does best”, says Peter from California. “That is: assembling a large number of repairers to work together, providing repair to places where there is no local Repair Café or similar initiative, and repairing things that are too large to bring to an in-person event.”

Virtual Fixit Clinics are scheduled to be time-friendly to as much of the world as possible and have had as many as 70+ people attend from many American states, but also from the UK, France, Sweden, India, Belgium and the Netherlands.

And nice little sessions with one person can also work very well on YouTube:

How to repair blazers, pockets and sew on buttons | DIY Sewing Repair – YouTube

Whereas in Cambridge, On a Wednesday lunchtime you’ll be able to bring in electricals*, household and garden items, bicycles, toys, jewellery and clothing for 1:1 repair advice. There’ll be advice on software troubles too. Everything’s being done virtually using Zoom – once in the Cafe you’ll be in themed breakout rooms where you’ll meet your repairer.