The media assesses the green commitments made at the summit

The UK government has just issued an end-of-summit communiqué:

Government sets out commitments to biodiversity and sustainability in G7 Nature Compact – GOV.UK

The US government provides the full text of the joint statement:

Much of the constructive work from the summit has focussed on sustainability.

Firstly, various systems of accountability and transparency have been set up:

Sustainability: G7 Summit and COP26 to be ISO assessed – EN

The Daily Mail’s This is Money pages look at further commitments which business might be interested in:

Could the G7 summit in Cornwall help YOU build back better? Here’s where to invest…

Tax and economic stimulus represented substantial G7 starters. But the main course for the G7 was all about environmental commitments. In his inaugural speech Boris Johnson – despite arriving at Carbis Bay by private jet – linked the climate agenda to economic growth and stimulus, stating that G7 members ‘are united in our vision for a cleaner, greener world’. He said a green technological revolution has ‘the potential to generate many, many millions of high-wage, high-skill jobs’.

The spotlight is now on further tax incentives for green businesses, as well as tighter reporting requirements for companies on their sustainability criteria. Jason Hollands, a director of wealth manager Tilney, says: ‘The focus on reducing carbon emissions is already permeating economic policies, such as those aimed at increasing the use of renewable energy and the phasing out of petrol and diesel vehicles.’ …

Could G7 summit help YOU build back better? Here’s where to invest… | This is Money

The media portal gasworld, based in the West Country, looks at the ideas around new technologies which were highlighted at the summit:

Spotlight on Cornwall – and decarbonisation – for G7 Summit

Among the other key topics for discussion at the G7 Summit 2021 is climate change and decarbonisation – another critical issue that the industrial gases industry is at the very heart of, with its expertise, solutions and increasing efforts in areas such as hydrogen energy, carbon capture and utilisation (CCUS) and even alternative energies such as LNG and biomethane…

Then there is the politics of sustainability, as reported in the FT:

Environment groups criticise lack of detail on how proposals will be financed.

Leaders of the G7 countries will back a western rival to China’s Belt and Road Initiative on Sunday, with a plan to mobilise billions of dollars to help developing countries tackle climate change. US president Joe Biden has led calls to offer poor countries a new source of infrastructure finance, providing a “democratic” alternative to Chinese loans, which are seen in the west as a tool to spread Beijing’s influence. Leaders at the G7 summit in Cornwall will agree what allies of UK prime minister Boris Johnson, the summit host, call a “green belt and road” plan, with richer countries helping to fund schemes that reduce carbon emissions…

Finally, however, as pointed out by the Independent a couple of days ago, not everything has been exactly sustainable at the summit:

As world leaders descend on Cornwall for the first in-person G7 summit in almost two years, the Carbis Bay Hotel hosting the talks is facing criticism over its decision to cut down trees in order to build new meeting rooms in which the planet’s environmental future will be under discussion…

“We haven’t got enough money to get buses to run on time in Cornwall but suddenly they’re improving the roads for Joe Biden’s cavalcade?” local journalist Sam Parsons told The Independent’s Colin Drury…

The considerable carbon footprint set to be left behind by the motorcades, security vehicles, ramped up police presence and press corps is also causing concern among activists. “You’ve got lorries everywhere and Chinooks buzzing about in the sky,” Ocean Rebellion co-founder Rob Higgs told The Independent… 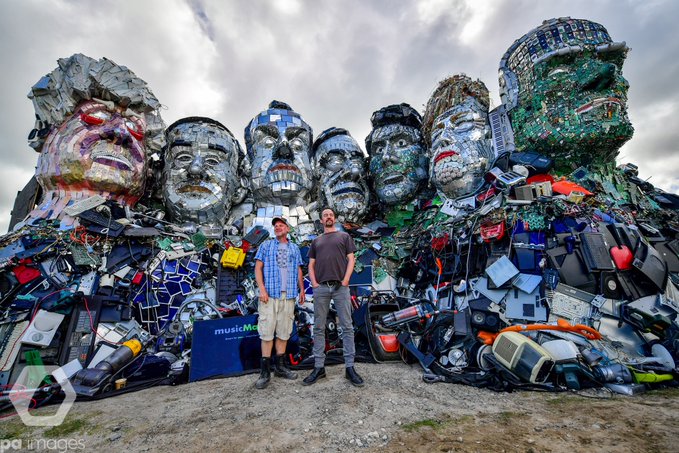 All of this is of course being greeted with plentiful protests from environmental groups. “Mount Recyclemore”, a Mount Rushmore-style sculpture made of electronic waste and carrying the faces of the G7 leaders, has appeared on the beach opposite the Carbis Bay Hotel…

photo: Alex Eccleston on Twitter: “Mount Trashmore by ‘Mutoid Waste’ (Alex Wreckage and Joe Rush) on the beach near Gwithian, overlooking St Ives Bay, ahead of the G7 summit in Cornwall. https://t.co/pL6AThJlhs” / Twitter