“It is increasingly important that these raw materials are extracted in the most environmentally responsible, low carbon manner possible, otherwise this could mitigate any of the positive impacts associated with these technologies replacing fossil fuels.”

Across the global lithium frontier, environmental activists, indigenous communities and residents concerned about the threats to agricultural livelihoods are protesting over what they see as the greenwashing of destructive mining.

At the beginning of the year, promises were made for ‘levelling up’ – with the South West receiving some of the lowest levels of public spending in the country:

Levelling up in the South West – Vision Group for Sidmouth

Over this weekend, specific promises were made as part of the G7 ‘Legacy’:

Meanwhile, one such specific ‘legacy’ is the promise of ‘green energy’ coming out of the region – again as reported earlier in the year:

In particular, lithium – the resource needed for battery technologies:

As reported over the weekend, green energy is seen as much more promising than the likes of the hospitality industry:

It means more hope than ever is being invested in new industries like lithium mining, and geothermal energy too. These industries have the potential to kill two economic birds with one stone – decarbonisation and levelling up, while reducing people’s dependency on a sector that is both fickle and seasonal.

“One in five jobs in Cornwall depends on tourism and we need to change that,” says Conservative MP for Truro and Falmouth, Cherilyn Mackrory. “We want a different Cornwall that isn’t reliant on handouts.”

And perhaps the extraction of lithium in Cornwall can be more environmentally friendly than in other parts of the world – whether in China or Chile:

As reported in today’s Guardian:

Does fighting the climate crisis mean sacrificing communities and ecosystems? The supply chains that produce green technologies begin in extractive frontiers like the Atacama desert. And we are on the verge of a global boom in mining linked to the energy transition. A recent report published by the International Energy Agency states that meeting the Paris Agreement’s climate targets would send demand skyrocketing for the “critical minerals” used to produce clean energy technologies. The figures are particularly dramatic for the raw materials used to manufacture electric vehicles: by 2040, the IEA forecasts that demand for lithium will have increased 42 times relative to 2020 levels.

These resources have become a new flashpoint for geopolitical tensions. In the US and Europe, policymakers increasingly talk about a “race” to secure the minerals linked to energy transition and shore up domestic supplies; the idea of a “new cold war” with China is frequently invoked. As a result, northern Portugal and Nevada are slated for new lithium projects. Across the global lithium frontier, from Chile to the western United States and Portugal, environmental activists, indigenous communities and residents concerned about the threats to agricultural livelihoods are protesting over what they see as the greenwashing of destructive mining.

However, new, cleaner and less disruptive technologies are emerging:

And the Cornish project does seem to be innovative in environmentally friendly extraction – with this blurb from Cornish Lithium: 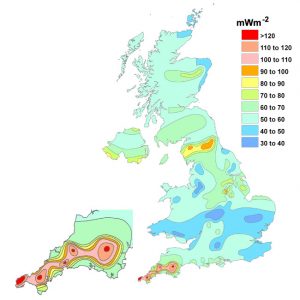 The need to build low carbon technologies to combat climate change is resulting in a significant rise in the extraction of raw materials. This means that it is increasingly important that these raw materials are extracted in the most environmentally responsible, low carbon manner possible, otherwise this could mitigate any of the positive impacts associated with these technologies replacing fossil fuels. The use of Lifecycle Assessments (‘LCAs’) can be a useful tool for comparing possible production routes for raw materials, and the impacts associated with them.

Equally, companies must embrace new technologies which allow more efficient extraction of critical raw materials, and minimise waste at the same time. Cornish Lithium is pioneering the low carbon extraction of lithium from hard rock mica minerals, and from within lithium-enriched geothermal waters in Cornwall, South West England. It is the advent of new extraction technologies which have helped to ‘unlock’ these mineral deposits, which were previously considered unconventional.

Building an environmentally responsible lithium supply chain for the UK