How it can “promote activity, a strong sense of place, boost local economies and provide (almost) everything you need for life within walking distance.”

The idea of the ’15-minute neighbourhood’ is being pushed as policy in Paris:

The 15-minute neighbourhood: valuing our places on foot – Vision Group for Sidmouth

And things are really stepping up:

With other places taking a keen interest:

And with this piece from the WHO today:

What human invention has caused more deaths than World War I or the Spanish flu, both among the worst killers of all time? It’s the modern road transport system. Since the automobile came into being at the end of the 19th Century, more than 50 million people have died on the world’s roads…

As we embark on building back better from the COVID-19 pandemic, the time has come to return urban streets to people…

Streets are for people; it’s time we give them back

Not everyone has been keen on some of the measures introduced during the last twelve months:

The questions around Low-Traffic Neighbourhoods – Vision Group for Sidmouth

Low Traffic Neighbourhoods: What are they and why are they so controversial? – LBC

Even though the ideas and practices have been around for a long time: 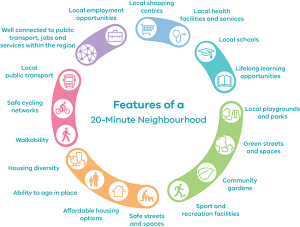 Nevertheless, there’s a lot of enthusiasm for the ’15/20-minute neighbourhood’.

This is from Melbourne (see diagram):

People love the idea of 20-minute neighbourhoods. So why isn’t it top of the agenda?

And this is from Scotland:

With a handy guide just out from the TCPA:

Finally, in support of the UK department of transport’s Green Transport Recovery and Restart programme, a series of webinars has been put together:

Green transport restart and recovery: how we can help

Including an event tomorrow:

The idea of the ’20-minute neighbourhood’ is enjoying a resurgence. Although far from new: back in the early 1960s, US urbanist Jane Jacobs demonstrated how compact urban blocks promote activity, a strong sense of place, boost local economies and provide (almost) everything you need for life within walking distance.

And now, post COVID, the idea is re-gaining popularity…