“We all want a greener London but this is no way to go about it. If you want fewer car journeys overall, then residents need more incentives and less punishment. More carrot, less stick.”

During the first lockdown, as reported on these pages, there was a lot of talk about promoting ‘low-traffic neighbourhoods’:

Nine organisations including Greenpeace and the Transport Action Network have written an open letter to the UK secretaries of state for transport and the environment, as well as the chancellor, leaders of local and regional authorities and city mayors. “It would be completely absurd if, after the unprecedented efforts and sacrifices made to save thousands of lives from Covid-19, we allowed thousands more to be cut short by the devastating impacts of toxic pollution,” the letter reads.

The group’s demands include wider pavements, protected cycle tracks and the installation of bus gates, bollards and planters to limit traffic in residential and shopping streets. The letter also calls for networks of low-traffic neighbourhoods and for walking and cycling to be prioritised along main roads. 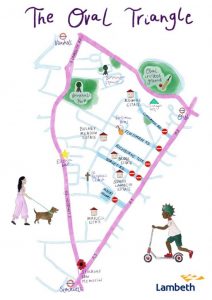 There are now new schemes popping up everywhere it seems:

It’s not only good for the environment and our health, but also for our High Streets:

Walking and cycling: the economic benefits

However, they are not universally popular, as the current tussle in Enfield is showing:

All about low traffic neighbourhoods

And these tussles are going quite deep, as reported in the New Statesman:

Low-traffic neighbourhoods: How the culture wars came to a street near you

Conflict over the government’s latest car reduction measures is dividing communities across England.

To some, LTNs mark a long overdue change in England’s relationship with car use and a bold reimagining of the very nature of our local streets. To others, they are blunt and disruptive – dividing communities and damaging day-to-day lives, despite good intentions.

Unlike the usual debates over car reduction measures, the heartache over LTNs goes far beyond predictable battles between irate motorists and pious environmentalists.

Rosamund Adoo-Kissi-Debrah embodies these dividing lines. A campaigner against pollution, whose nine-year-old daughter Ella died in 2013 after severe asthma attacks, she is a health and air quality advocate for the World Health Organisation and ran as the Green Party candidate for Lewisham East, south-east London, in the last election.

Adoo-Kissi-Debrah, however, is concerned about the effect of LTNs in her borough. In Hither Green, Lewisham, where she lives, her street is outside of the local LTN, and she has seen traffic surge on the South Circular, affecting her own and adjoining roads.

Low-traffic neighbourhoods: How the culture wars came to a street near you

And in the Guardian:

How communities are divided over low-traffic neighbourhoods

… not everyone living under an LTN has found the transformation a positive one.

Daniel, 33, lives on a main road leading to the South Circular in London’s Hither Green, where an LTN was introduced soon after the first national lockdown in March. He felt that the measures deepened divide between wealthier and poorer residents, increasing pollution for those living near main roads.

“The LTN measures have moved traffic away from the Manor House side of Hither Green where a three-bedroom house costs £1m, to the poorer side nearer Catford, where we live,” he said. “The traffic leading on to the South Circular is now gridlocked every day and created a massive bottleneck. The streets under the LTN are really nice, but they’ve just pushed it all towards Catford,,” he added.

Daniel said he supported a greening of his local area, but felt it should be approached differently. He suggested the council focus on incentivising people to take public transport, or increasing opportunities for charging electric cars. “We all want a greener London but this is no way to go about it,” he said. “If you want fewer car journeys overall, then residents need more incentives and less punishment. More carrot, less stick.”

How communities are divided over low-traffic neighbourhoods | Environment | The Guardian

In fact, the Guardian has got quite a few articles from the last couple of days on the topic:

So you want to set up a low-traffic neighbourhood? Here’s where to start | Environment | The Guardian

Mythbusters: eight common objections to LTNs – and why they are wrong | Environment | The Guardian

‘I got it wrong. Since the changes it’s become more vibrant’: life in an LTN | Environment | The Guardian