“Watch out for flying fruits!”

It’s autumn – season of mists and mellow fruitfulness, as noted by Ed Dolphin writing in the Herald recently on behalf of the Sid Valley Biodiversity Group and the Sidmouth Arboretum:

The A-Z of fruit. 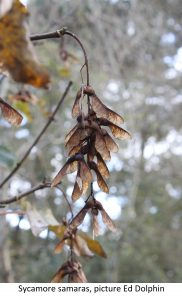 It is the time of year to watch out for flying fruits, I was hit on the head by one the other day while playing croquet, but it didn’t hurt a bit.

Trees need to spread their fruits because they hold their seeds, if they all just dropped to the ground under the parent tree, the seeds would not be able to grow.

Many trees such as Apple, Cherry and Devon Whitebeam produce tasty fruits. Animals eat them, the seeds pass through their digestive system and are dropped elsewhere, usually with a good amount of natural fertiliser. The technical term for this is Zoochory, literally animal spreading. One word of warning, some apparently attractive fruits such as the Spindle have poisonous seeds inside. Although technically a cone not a fruit, the arils of the Yew tree are another case.

But not all fruits are sweet and juicy. A fruit is just the outer wrapper that contains and protects the seeds. Many trees have dry fruits that fly away on the wind, this is termed Anemochory. Anemo- is from the Greek for wind, a wind gauge is an anemometer. 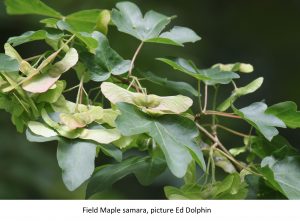 Trees in the Acer genus, including Sycamore and Maples, have a type of fruit called a samara which has a wing. The lop-sided samara spins like a small helicopter a it drops, and this can take it a long way when it is windy. It was one of these that hit me the other day. The nearest tree to the Fortfield croquet lawn is 60m away on the Three-Cornered Plot, but that is no distance to a winged fruit. Ash keys are also a type of samara. I used to live 200m away from a large Ash tree, but I still had hundreds of Ash seedlings pop up in the vegetable plot each year.

Birch trees have tiny winged fruits called nutlets that can be carried for more than a mile. Willows and Poplars produce tiny seeds with fluffy cases, these can go for many miles on a windy day. So, watch out for flying fruits as the autumn gales blow in.