“Scientists’ increased confidence in linking current extreme weather to climate change may be a notable bright spot, offering a potentially crucial weapon that climate activists and communities  can use to pressure politicians and industry to take action before it’s too late.”

“Your dishes are irrelevant. What matters is: what you drive, what you eat, how you heat your home, and how much you fly. If the government wants to engage people before the summit, it should offer incentives for buying electric cars and heat pumps.”

The IPCC’s latest report is out today – as covered by one of the review editors of the report in the Conversation:

Monday’s IPCC report is a really big deal for climate change. So what is it? And why should we trust it?

On Monday, an extremely important report on the physical science of climate change will be released to the world. Produced by the Intergovernmental Panel on Climate Change (IPCC), the report will give world leaders the most up-to-date information about climate change to inform their policies.

It is an enormous undertaking, and has been a long time coming.

This report is the culmination of a marathon five-year assessment, writing, review and approval process from 234 leading scientists hailing from more than 60 countries. These scientists have worked together to rigorously evaluate the world’s climate change research papers — more than 14,000 of them.

Monday’s IPCC report is a really big deal for climate change. So what is it? And why should we trust it?

Time magazine sees the report as a powerful means to put pressure on the decision-makers:

The One Silver Lining in the Bleak IPCC Report

As heat waves, hurricanes and other extreme weather events around the world hit harder and more often in recent years, scientists have become more confident than ever before in placing the blame unequivocally on human-made climate change.

That shift was reflected in a starkly updated section of the latest version of the International Panel on Climate Change’s (IPCC) Assessment Report, published Aug. 9, which compiles years of climate science into what is widely considered the definitive document outlining the current state of knowledge on the atmospheric changes happening around us, and what the future may hold. The overall message of the new report—the sixth iteration of the document—was worrying, describing large average global temperature rises in recent decades and a shrinking window to reduce emissions and avert worst-scenario outcomes. But the scientists’ increased confidence in linking current extreme weather to climate change may be a notable bright spot, offering a potentially crucial weapon that climate activists and communities affected by heat waves and flooding can use to pressure politicians and industry to take action before it’s too late.

The Daily Mail reports on the response in the UK:

Ordinary Britons WILL have to pay to go green: Minister pledges help for families to pay for environmentally friendly initiatives amid Tory disquiet over punishing taxpayers – as Boris Johnson says doomsday UN climate report is a ‘wake-up call’ 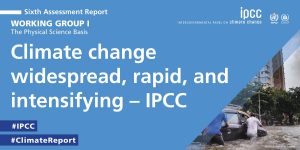 Ministers pledged help for hard-pressed families to go green today amid questions over the cost to taxpayers of the Prime Minister’s climate change plans. The Prime Minister wants a ‘net zero’ Britain by 2050 that includes banning gas boilers in homes and sales of new petrol and diesel cars.

Mr Johnson today  said a damning UN report highlighting the scale of global climate change was a ‘wake-up call’ for the world and demanded an end to the use of coal for power.

But the PM, who hosts the Cop26 meeting of world leaders to discuss climate action in Scotland in the autumn, is facing pushback from within the Conservatives Party. Kent MP Craig Mackinlay has launched a group to to push back at plans he argues could be could ‘completely kill us off politically’. He and others argue they will hit poorer voters in former ‘Red Wall’ areas who voted Conservative for the first time in 2019.

Business Secretary Kwasi Kwarteng today said ministers ‘want to try and help people make that transition’ when asked about the expense to consumers of scrapping gas boilers. He told BBC Radio 4’s Today programme: ‘There is a transition and that’s something that we’re focused on and we want to try and help people make that transition… We’ve got a Heat and Buildings Strategy that is going to come out very soon – I don’t think it was quite January, I think it was in March, but… I’m very keen to see it published because I think that will set out a number of options.’ But he admitted he was ‘concerned’ about a ‘£20 billion hole’ in the public finances created by a loss of fuel duty through the switch to electric cars, adding: ‘ I don’t have the authority to write budgets or dictate tax policy.’

Britain WILL hit ‘net zero’ by 2050, insists minister ahead of climate report – but who will pay? | Daily Mail Online

Katy Balls, who writes for the Spectator and i-news, looked last weekend at the quandary the PM faces; here’s here conclusion:

The Prime Minister’s promise earlier this year in an interview with The Sun that his green agenda will not lead to any new tax rises for hardworking Brits raised eyebrows in Cabinet. Even senior Tories enthusiastic for the green agenda worry that Johnson’s “have your cake and eat it” approach could come back to haunt them.

Rather than promise no cost, they argue that the Prime Minister ought to level with people. “We should be open about the fact that consumers could feel some of the cost of this but the cost of not doing anything will be higher,’ says a One Nation Conservative MP.

The Prime Minister’s long-held belief is that industry will adapt faster than most expect and trade-offs can be avoided. But as attention turns to green issues, he’d be wise to have a fall-back plan.

In fact, many observers fear that policy-making is proving just too slow.

Here’s Henry Mance writing in the FT earlier in the week:

Political inaction is dragging the UK deeper into the climate crisis

Global warming is the defining issue of our times, but among policymakers there is no urgency

The first histories of the pandemic have been written, and they converge on a single truth. In March 2020, the scientific evidence became so overwhelming that conscientious western political leaders declared an emergency. They acted more radically than they had ever imagined.

Histories of climate action are being written too, and they read very differently. In the past few years, the scientific evidence became so overwhelming that conscientious western political leaders declared an emergency. Then they delayed — acting timidly, sporadically, belatedly.

The contrast is infuriating. In what sense is the UK government, or any other government, treating climate as an emergency? Where are the stark press conferences, the appeals to solidarity? Imagine calling out the fire brigade to a blaze, then watching them sit around discussing how first to rescue a cat from a nearby rooftop. That is where we are.

Environmentalists have learnt the hard way: at most, people will change their behaviour in a few ways, so focus on those steps with the biggest impact. Your dishes are irrelevant. What matters is: what you drive, what you eat, how you heat your home, and how much you fly. If the government wants to engage people before the summit, it should offer incentives for buying electric cars and heat pumps.

There isn’t time to move slowly. The Dimbleby food review proposed UK meat consumption should fall 30 per cent by 2030. If the government doesn’t want to tax meat, it needs to work with supermarkets and schools to change Britons’ diets more subtly.

Our best hope is that the pandemic and climate action become part of the same story — of how our ingenuity overcame prevarication. But that won’t happen if politicians keep treating the climate as just one more policy silo.

But it’s not just the PM and his party that are moving so slowly, as Isabel Hardman, assistant editor of the Spectator, noted in yesterday’s Observer:

Britain needs big ideas for big problems, but its leaders don’t appear to have any

If Boris Johnson and Keir Starmer harbour grand ambitions about tackling climate change, crime and inequality, they should do something about them

Both men have a clear grasp of the big issues facing the country. Neither seems able to say anything that remotely matches up to those challenges…

What’s going on? Why is everything so small? Johnson’s political career has been wound around big moments, from Brexit to Covid. He’s not a politician who delights in the little things…

There’s no real pressure on the climate or indeed anything else from Starmer. The Labour leader has fallen into the same trap as Johnson of thinking that because he’s talked about something in a speech or an interview, he’s definitely taking it seriously. But what green policy has Labour unveiled in recent months that’s had the Tories worried? Nothing…

Britain needs big ideas for big problems, but its leaders don’t appear to have any | Isabel Hardman | The Guardian