Enjoying the landscapes, the tearooms and the pretty villages of the South-West.

We are very much in Rosamunde Pilcher Land.

The popularity of these parts is very much because of the films made from her books set in the South-West:

There films are a regular on German TV: 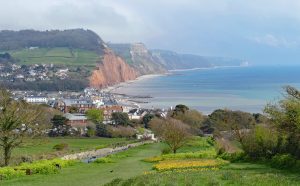 Consequently, this time of year, there are lots of German-speaking tourists enjoying the landscapes, the tearooms and the pretty villages of the South-West:

And the stunning coastal paths of course:

picture: Approaching Sidmouth | Walking down through the last of the … | Flickr