“East of the supergroyne, nothing is planned.”

The BMP’s steering group met up a fortnight ago:

Although there still have to be a press release and the promised publication of minutes on-line:

There has been some coverage in the press – which has been very mixed in its messaging.

The latest Herald has the steering group’s meeting on its front page, saying very positive things: 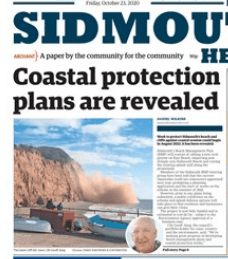 The Nub News has carried two stories – which seem contradictory, but aren’t:

The BMP currently looks to reducing erosion part way along the eastern cliffs by means of a ‘supergroyne’ and recharging the beach every ten years:

Latest on plans to protect Sidmouth’s cliffs from collapsing into the sea | sidmouth.nub.news

The Plymouth University study into erosion gives a worst-case scenario which is very alarming, but doesn’t take into consideration the mitigation offered by the BMP:

However, as pointed out by a commentator, there is still a problem with this

Those proposed works only apply to points between Pennington Point and the supergroyne.   Within that area, erosion will be reduced, although many people think by not enough…

More to the point, the supergroyne, whatever length it is, but especially if it is 120 metres long, will certainly mean significant terminal erosion. Thus making things worse than predicted by Plymouth University.

So, even if the supergroyne is effective, which many doubt, that will only mean that it will be outflanked and we will see differential erosion either side of the groyne.

These images are from the official exhibition of 2016, which show where the proposed supergroyne would stop:

Information Posters – The Scheme At A Glance – East Devon 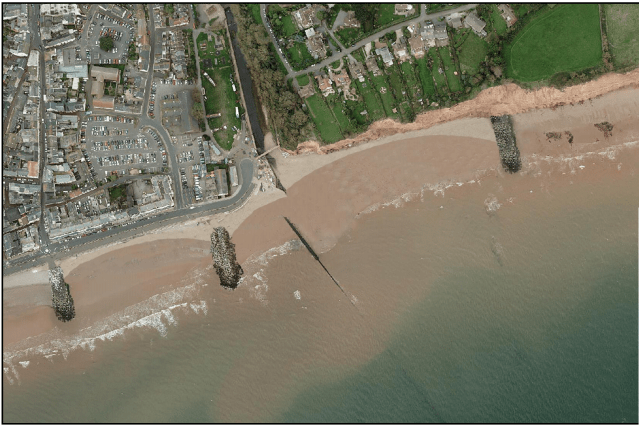 Sidmouth Through the Ages