Peter Pomerantsev’s latest book, ‘This is not propaganda’ looks at how negative and fake news has become normalised:

This Is Not Propaganda | Adventures in the War Against Reality |.publicaffairsbooks.com

In his conclusion he looks to Denmark and ‘constructive news’ as a way to combat this seemingly unstoppable stream:

“The theory of Constructive Journalism deals with how to communicate solution-oriented news and stories instead of only focusing on stories that are negative and filled with conflicts.”

The idea first emerged some fifty years ago:

And for the past couple of years this has been advanced by Danish journalist Ulrik Haagerup:

“I think the idea of Constructive News is a way to make journalism more meaningful again. To make people trust us more. And that’s the biggest threat right now. People don’t trust us because they think we are too biased, they think we exaggerate things, that we tend to focus on their troubles, that we only do stories to generate clicks… they think journalism is just a product to be sold and… that’s wrong” 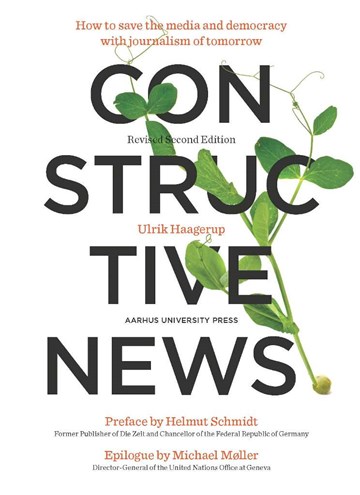 “Negative stories make the news. Drama and conflicts, victims and villains are our modern world. Or are they?

This revised second edtion on constructive news challenges the traditional concepts and thinking of the news media. It shows the consequences media negativity has on the audience, public discourse, the press and democracy as a whole.

The book also explores ways to change old news habits and provides hands-on guidelines on how to do so. Moreover, the book presents numerous examples from the author’s ten-year tenure as executive director of news at the Danish Broadcasting Corporation where he led a successful paradigm shift in news production.

Constructive News is a wake-up call for a media world that struggles for a future, as well as an inspirational handbook on the next megatrend in journalism.”

Constructive News | How to save the media and democracy with journalism of tomorrow | en.unipress.dk/