More and more companies and financial institutions understand the risk of high-carbon assets. 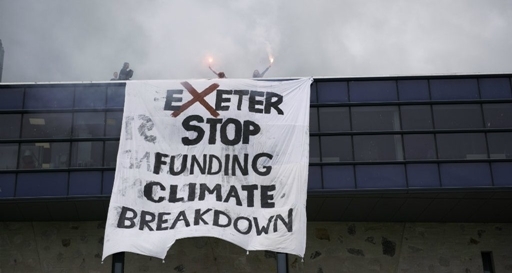 Exeter University is taking its money out of oil:

Half UK universities commit to divesting from fossil fuels | ft.com

The Financial Times looks at the future of oil:

Can the world kick its oil habit?

The world runs on oil. The dark, often viscous liquid is the single biggest contributor to the world’s energy mix, at 34 per cent of consumption, followed by coal at 27 per cent and natural gas at 24 per cent. But the fossil fuel has also quietly seeped into other aspects of our lives: from paint, washing detergents and nail polish to plastic packaging, medical equipment, mattress foams, clothing and coatings for television screens.

History does not inspire confidence in humanity’s ability to wean itself off particular energies. Even after the world began moving from coal to other fuels, coal did not disappear. With the emergence of each new source, we have simply added it to the mix rather than replacing old ones.

“It usually takes 70 years for energy transitions, such as the one from wood to coal, to happen at a natural speed. We need to see a greater magnitude of change, in fewer than 30 years,” says Nick Stansbury, head of commodity research at Legal & General Investment Management, where he helps oversee $1.3tn in funds.

“We need to make a bigger change, twice as fast as it has ever happened before. This is no way going to be easy.”

Climate activists argue that, unlike before, it is now a matter of urgency. Yet the IEA — the industry standard-bearer, which itself has been criticised for being too fossil fuel-friendly — has warned that even if governments meet existing targets, carbon emissions are set to rise through to 2040.

Greta Thunberg, the 17-year-old Swedish activist, argued last month that commitments by companies and cities towards “net” zero emissions in several decades’ time were useless. They needed to fall, not break even. “We need real zero,” she said.

Despite the challenges, not everyone feels hopeless about the world’s chances of transforming its energy future. Christiana Figueres was the Costa Rican diplomat who brought the leaders of 195 countries together in 2015 to sign the Paris agreement…

Around the world, individuals are taking to the streets and risking arrest to demand climate action, but their impact will depend on states and industries taking a lead. Figueres is encouraged by the signs that investors and corporations are beginning to act. “Governments have lost their mojo and have fallen behind compared to where companies are,” she says.

She notes that Larry Fink, chief executive of the world’s largest fund manager, BlackRock, wrote in his January letter to clients of the need to assess the impact of climate change on investment risks.

“I believe we are on the edge of a fundamental reshaping of finance,” he wrote, announcing plans to increase the group’s sustainable assets tenfold from $90bn today to $1tn within a decade.

“Every day we see more and more companies and financial institutions that understand the risk of high-carbon assets,” says Figueres. “No matter where you look, the movement is in that direction.”

Can the world kick its oil habit? | ft.com