“The solutions are out there, now it’s about will – it’s about politics, business, and public will to back these ideas.” 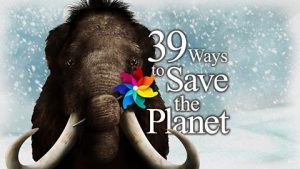 Back in January, Tom Heap started a new series on Radio 4:

These were among the ideas he explored:

He interviewed people looking at practical ways to deal with the issues:

In 25 years of reporting on the environment, I’ve become unshakably convinced in the seriousness and urgency of tackling climate change, but also rather dismayed that our successes in reducing greenhouse gases and promising scientific breakthroughs go largely unreported.

I’ve seen super plants that improve photo-synthesis, cows that belch less methane and next-gen solar panels. But there is one individual who deserves to be as famous in green-tech as Elon Musk for how his invention could help stop global warming. His name is Peter Dearman and he lives in a semi-detached house in Bishops Stortford. Here, in his garage, he invented a motor that runs on air.

Around the world many girls leave school before completing their education. It’s said that those who stay to the end of high school have more agency and choice, but also earn more money and have fewer and healthier children.

Tom Heap hears how education and access to family planning don’t just impact family size, it can also propel young women into positions of leadership where they can help their communities adjust to climate change. Dr Tamsin Edwards of King’s College, London helps Tom calculate just how useful secondary education for girls can be in the fight against climate change.

We invited Society Fellows David Johnson, CEO of the Margaret Pyke Trust, and Professor Mark Maslin, Professor of Climatology at University College London, to offer some observations on the potential of empowering girls to stay in education for longer and have the opportunity to make more diverse life choices. Their points take some of the themes of the programme a step further, and some relevant links are offered below…

Tom Heap interviews more people at the forefront of bringing ideas into practice in more episodes from his series, starting up again this week:

His main point, however, is that as individuals in our own domestic lives as consumers we cannot make much impact on climate change – “that most of the big levers are not actually in the hands of individual behaviour”.

Here’s another piece from back in January, where he’s interviewed at length: click on the link below for more:

I’m Tom Heap, I’ve been a broadcaster for 25-30 years now, with the last two-thirds of that very much specialising in science, the environment and rural affairs. Over that time, obviously, the climate change story has been growing in importance, volume and seriousness. I’ve been struck by how it seems to me that there are a lot of things being done to combat the problem, and there are a lot of really interesting innovations, break-throughs and passionate people which we don’t hear quite enough about, so the narrative becomes a little bit one-sided. We need to also hear about the narrative of redemption and what is actually happening by way of people beginning to turn this problem around. This is interesting, it’s empowering, and it gives people the critical belief, which I believe to be true, that this is not hopeless – we can do this.

The series, which aims to bring light to these more positive developments, is called 39 Ways to Save the Planet and will be going out across this year on Radio 4 and BBC Sounds…

If you want to galvanise people into engaging with something, then it’s no good just to focus on what’s going wrong, you need to tell them what’s going right as well. A good example of that is if you asked anyone in the street about the climate impact of our electricity in Britain, they’d probably say ‘it’s terrible, it’s getting worse, blah blah blah‘, but in fact, the amount of carbon in every kilowatt of electricity we generate in the UK has gone down by more than half in the last ten years; it’s been an extraordinary success story – our efforts to decarbonise our electricity in this country. This is an example of how I felt the successes were being under-covered.

The other thing is that in doing my research amongst the people who really know about this stuff – the Intergovernmental Panel on Climate Change (IPCC), the Climate Change Committee and the Royal Geographical Society – when you ask how much money it’ll take to cut carbon in the way we need to stop going over 1.5 degrees per the 2015 Paris Agreement, they all say something in the region of between 0% of GDP to 1.5% of GDP, and even the UK Treasury recently did a pretty similar analysis. Well, if you think about it, a penny in the pound to save the world sounds like a banging deal to me. If you begin to improve the environment, you’ll actually save money on things like flood damage, air-pollution-caused health defects, stuff like that. So, this idea that’s widely put around that decarbonising is going to cost a fortune and we’re all going to go back to the stone age is just rubbish.  It can be done, there are solutions out there, and it ain’t going to break the bank. If there’s one message I want to come out of this series, it’s that it’s doable…

It can be a criticism from some quarters that I’m sort of letting people off the hook, letting the audience off the hook, because one thing this series is not is telling you ‘here’s what you should be doing in your own life‘ – it’s not that. I make no apology for that in the sense that most of the big levers are not actually in the hands of individual behaviour, and the track record for trying to make people change their behaviour is woefully poor, so in a sense, why carry on banging your head against that spike? My feeling is that given that I said that it’s doable, it is a question of us supporting these things through what we buy, how we vote, how we invest, and yes, some decisions in our own lives. The solutions are out there, now it’s about will – it’s about politics, business, and public will to back these ideas.