“However, to encourage Town Councils to take responsibility for finding sites, they could be asked to submit an Energy Descent Plan, as developed by the Transition Towns Movement.”

One of them is finding sites for alternative energy generation, on pages 15/16:

The Town Council has just made their submission, which includes on page 29:

And, indeed, the Sid Valley NP is open to the siting of solar and wind sites, as of page 50, although there are several criteria:

The VGS has put together a draft submission to this consultation from the VGS:

It should be up to the Town Council, in consultation with its own residents and with reference to the NP, to determine the sites for any large-scale renewable energy schemes; as this is always such a potentially-divisive issue, it would be much better to garner support for such schemes locally rather than for them to be seen to be imposed by a higher authority.

However, to encourage Town Councils to take responsibility for finding sites, they could be asked to submit an Energy Descent Plan, as developed by the Transition Towns Movement:

There is also a comment on development in ‘protected landscapes’:

AONB landscapes are protected, with ‘great importance’ placed on the Sidford and Sidbury gap, for example:

Nevertheless, the industrial estate at Sidford has been allowed, despite being rejected at planning as it impacted protected landscape:

And yet an application for a solar farm in Sidbury was rejected:

Futures Forum: “It has not been demonstrated that development in the highly protected AONB landscape is essential.”

Difficult choices will have to be made.

On the other hand, permission was given to the small-scale installation of two small wind turbines towards Sweetcombe above Sidbury:

Meanwhile, in Creacombe near Yealmpton in Devon, a community-owned solar farm has been completed: 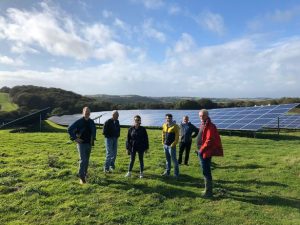 The Creacombe Solar Farm near Yealmpton project will generate enough green electricity to supply the equivalent of around 2,440 homes, or more than half the households in the five local parishes of Newton & Noss, Holbeton, Yealmpton, Wembury and Brixton. It will also save approximately 2,000 tonnes of carbon per year.

Developed in close cooperation with local group Yealm Community Energy (YCE), Gnaton Farms and the Lopes Family, the solar farm is on low-grade land owned by Gnaton Farms and was granted planning consent in 2017. Under the ownership of Community Owned Renewable Energy Partners (CORE), an initiative from charitable trust Power to Change, construction of the solar farm began in September and was completed at the end of January.

photo: Some of the Next Generation team at Newton Downs solar farm.