What will be the impact of flooding in the Sid Valley?

And along the coast?

Climate change and flooding: the impact on the Devon coast

Devon Live reports – and the mapping shows that the Exe, Otter and Axe Valleys are vulnerable:

Large parts of Devon and thousands of homes could be underwater by 2050, according to a new report.

An interactive map based on new sea level research shows that major conurbations in Devon are expected to be below the level of average flooding within 30 years’ time.

The study has been conducted by Climate Central, an independent organisation of leading scientists and journalists who research climate change and its impact on the public. Their report called “Flooded Future: Global vulnerability to sea level rise worse than previously thought” was released on October 29 this year.

As part of their study, which they say was aided by their new digital elevation model, an interactive map shows those areas most at threat.

Globally they predict that by 2100, areas now home to 200 million people could fall permanently below the high tide line. According to their interactive map, here are the areas of Devon that could be worst hit by 2050… 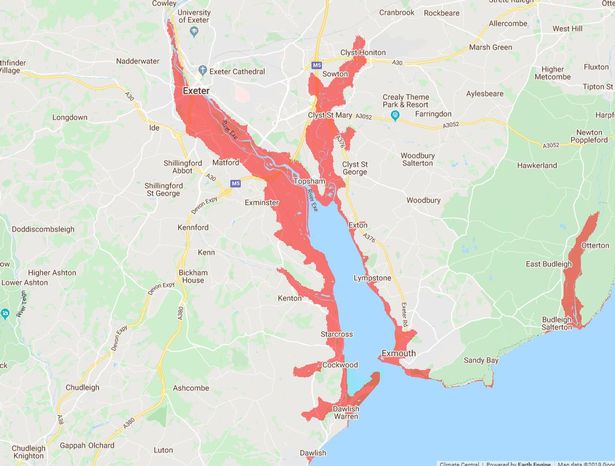 You can read the full report here: https://climatecentral.org/pdfs/2019CoastalDEMReport.pdf