The candidates are coming to town tomorrow evening: 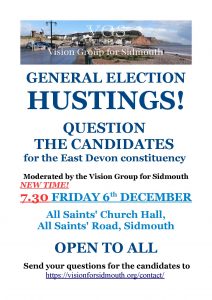 Vision Group for Sidmouth It is a real shame that the clash occurred but due to the circumstances we had little choice of hall and time. It was a judgement call as to whether to clash, or on the other hand not run a hustings at all.
We hope that the hustings is not boycotted, it doesn’t start until 7.30 pm and the late night shopping finishes at 8.00pm so we are hoping that the people coming to the hustings will come early and take advantage of the shopping.
We must agree that it is unfortunate that Simon Jupp is being slated for not being able to make it, that is not how we see the situation at all.

The event is due to be held on Friday. Poor show or fair enough? | Sidmouth Community

Meanwhile, here is some web presence of the candidates, in no particular order:

Peter Faithfull for East Devon in the UK Parliament elections

Henry Gent for East Devon in the UK Parliament elections