“It is usually wise to build on brownfield sites influenced by the existing grain and character.”

There have been a couple of news postings on housings of late.

A look at where most new housing will have to go in East Devon – and that’s on greenfield sites:

What is the housing quota for the Sid Valley? – Vision Group for Sidmouth

And a look at the ‘Evolution of the House Plan in Europe’ from the garden cities of England to the alcoves and quadrants of Amsterdam and Paris:

Would you prefer a small house or a damp house? – Vision Group for Sidmouth

A correspondent sends in their observations: 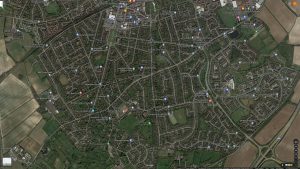 What’s interesting about the garden towns and cities from the earlier part of the twentieth century is the amount or social housing, whether it’s Letchworth City, Hampstead Garden Suburb, Becontree and other classics:

You can see the distinctive British suburbs and their cul-de-sacs when flying over Essex into London Heathrow (see google map over Letchworth). It is said the designs were based on the refuse collection vehicles access and turning circles.

From the air, Letchworth does indeed look ever so green: those sinuous, ‘natural’ looking shapes; yes, dominated by the car, but today they’d be called ‘low-traffic neighbourhoods’:

The questions around Low-Traffic Neighbourhoods – Vision Group for Sidmouth 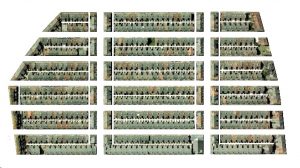 In contrast, just for fun, I did a little study of Victorian street patterns in Liverpool. Unlike the Garden City model note the rows of barrack-like terraces were serviced from the backstreets (see image on the left).

Some years ago I worked with architect friends on perimeter planning schemes in Merton. Based on the Cambridge University quadrants this was an attempt to replace the dreaded tower blocks whilst maintaining the residential density (see image on the right).

The Paris Haussmann blocks in the Arch Daily piece also point to the quadrant-style blocks, with views onto quiet greenery; this reminds me of the pre-war blocks in Berlin:

Evolution of the House Plan in Europe: from the Industrial Revolution to the Interwar Period | ArchDaily

Most of these plans have their shortcomings which is why it is usually wise to build on brownfield sites influenced by the existing grain and character.

Of course, when you get any ‘large-scale development’, there’s always some idea behind it – very often benign, such as the ‘model village’; very often ideological, such as the tower blocks that march across any city; and now totally about sucking the most added value from any investment.

Development should be truly ‘organic’ – following what’s already there.

We’re going to have to have housing on green field sites in East Devon apparently: not much grain and character…

To me it’s an interesting but complex issue.